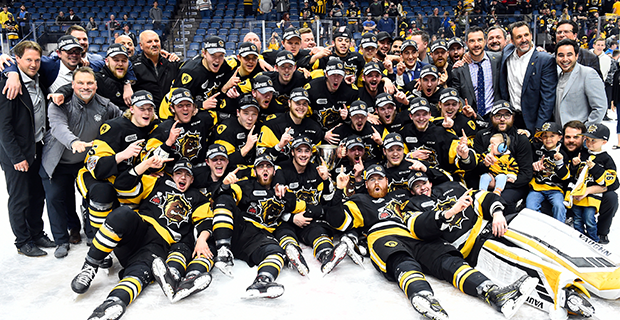 The Hamilton Bulldogs defeated the Sault Ste. Marie Greyhounds in six games to win the OHL championship and qualify for the Memorial Cup. (Aaron Bell/OHL Images)

The Hamilton Bulldogs didn’t need an ace in the hole to reach the 2018 MasterCard Memorial Cup.

Along with the Regina Pats and Oshawa Generals, they were a finalist in the Memorial Cup bidding process last year, and most figured the NHL-sized FirstOntario Centre, hotels in the downtown core and Hamilton’s proximity to Toronto would give them the edge.

Regina won the rights to host it instead, and thus the Bulldogs went to work on forming a team strong enough to make it the old fashioned way.

Backed by a number of mid-season trade pickups, most notably St. Louis Blues prospect Robert Thomas, the Bulldogs were able to outlast the Sault Ste. Marie Greyhounds, the CHL’s top-ranked team, to win the OHL title and punch their ticket to Regina.

In the OHL final, Hamilton surprised many in a six-game series win over the Soo, who put forth one of the most dominant regular season performances in recent history.

Coach John Gruden said it really showed the team’s ability to play with resilience and urgency.

“We collectively do that,” Gruden said. “We’re a very tight group. (Captain Justin Lemcke) has done a great job and our leadership is outstanding. We’re having a lot of fun with this.”

Even after going through back-to-back seven-game series, the Greyhounds still went punch-for-punch with Hamilton, with both teams setting the stage for a very fast-paced championship series.

Like his coach, Lemcke believes the Bulldogs have an abundance of character. Even though they only played 15 games leading into the final compared to the Soo’s 18 and didn’t have nearly as extensive of a travel schedule as the Greyhounds, Lemcke says it was a tough road just to get to the championship series.

“We’ve had to bring it every night,” said Lemcke, who knows a thing or two about adversity, having come back from a fractured fibula two years ago. “The games we didn’t play our best are the ones we lost in each series.”

Hamilton overcame the Western Conference’s dominance in OHL finals. In the last 12 seasons, the Bulldogs are only the second Eastern Conference team to win the league title.

It took an all-around effort for the Bulldogs to get through the OHL final.

While a lot has been said about Thomas, the OHL’s playoff MVP and Hamilton’s leading scorer through the playoffs, and the Bulldog’s leading playoff goal scorer, Brandon Saigeon, there’s a number of players who may have been underrated during Hamilton’s playoff run.

Defenceman Riley Stillman, another one of Hamilton’s prized trade acquisitions, took his game to another level in the playoffs and contributed with five points in the championship series, including game-tying goals in games four and six.

Ben Gleason has emerged as a top-end defender as well and averaged close to a point per game in the playoffs.

It took a while for MacKenzie Entwistle to get going in the post season, but he has now scored 10 goals in his last 14 games.

And of course, the Bulldogs wouldn’t be where they are if it weren’t for some timely saves from Kaden Fulcher too.

While some people felt the Bulldogs got through in an upset over the Greyhounds, Gruden isn’t going to label them underdogs at the Memorial Cup.

“We know when we’re doing it the right way, skating out pucks and sticking to the game plan, we’re a really good hockey team,” he said.

“We’re not here by accident. This group has worked their butts off all season to get us to this point.”

In Regina, Hamilton will look to its regular season leading goal scorer, Matt Strome to play a big role.

Ryan Moore and Nicholas Caamano, both acquired through a major trade with the Flint Firebirds in November, are among Hamilton’s biggest point getters as well.

It’s been a quick rise to success for the Bulldogs since the franchise moved to Hamilton from Belleville in 2016.

In their first year, they didn’t make the playoffs and were eliminated in a first-round, seven-game series against the Kingston Frontenacs in 2017.

Prior to being sold and moved to Hamilton, the Belleville Bulls won their last OHL championship in 1999 and qualified for their last Memorial Cup in 2008.

The Bulldogs will try to continue the OHL’s winning ways at the Memorial Cup. The trophy has been hoisted by OHL clubs the last three years – Oshawa Generals in 2015, London Knights in 2016 and Windsor Spitfires as hosts in 2017.

While Hamilton had a rich history in the OHL up until the early 1990’s, the last time the city boasted a Memorial Cup championship team was in 1976 when the Hamilton Fincups were victorious.