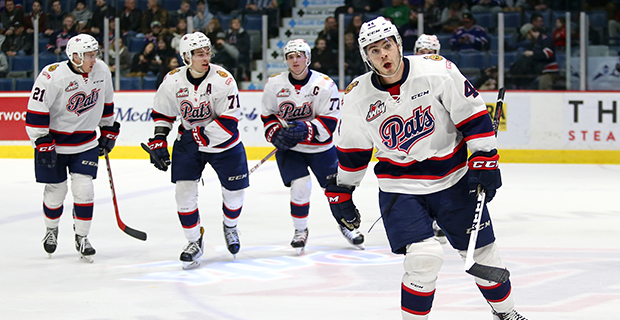 There’s no question about it, the WHL’s regular season belonged to the Regina Pats, but standout defenceman Connor Hobbs knows as well as anyone that it only gets harder from here.

The Pats capped off their 72-game docket by making franchise history, and in fitting fashion to boot. With a staggering 52-12-7-1 record to close out their final weekend before playoffs, this season’s Pats squad became the first in the team’s 50-year history to crack the 50-win plateau. It’s a benchmark the Pats have been working toward breaching for the past few seasons, starting with a trade that secured Hobbs’ presence on the blue line back in 2015 – but the league-leading defensive scorer stresses the achievement doesn’t mean much until they back it up in the playoffs.

“We’re not satisfied until we can reach that main goal, which is getting it done in playoffs. We’re just super excited moving forward here, just to prepare and be ready for the playoffs,” said Hobbs, adding it’s still a nice feather in the cap. “It’s hard to explain I guess. It’s pretty special obviously. A lot of work got put into this season and it feels great to be up there in the history books.”

The Pats have been building toward this very opportunity over the past few seasons — and Hobbs has been there from the ground up. The 20-year-old Saskatoon product became a Pat halfway through the 2014-15 season in a trade with the Medicine Hat Tigers — one that signalled a rebuild year for the Regina franchise. Pats head coach and general manager John Paddock gave up former captain Kyle Burroughs and top tier goal-scorer Dryden Hunt to acquire Hobbs — along with second and third round draft picks — but the trade helped firm up what would become one of the most dominant teams in the franchise’s history.

“We talked a lot about the standard of excellence and building the program,” said Hobbs. “When I got traded there, they talked about putting the right pieces in place and I’m glad they chose me because, man, is it fun. It’s so much fun right now and it’s just really humbling to be a part of this team.”

Hobbs finished the season off with 1.27 points per game, good for the best defensive marks in the league. He was sitting on a plus-30 rating and contributed on 42 power play goals and four shorthanded markers.

He wasn’t alone atop the statistic leaderboards either. Pats forward Sam Steel wrapped up his 18-year-old season with a league-best 131 points, while overage captain Adam Brooks was hot on his heels with 130. Brooks notched seven of those points in the Pats’ last two games of the season, a 7-1 win and a 6-0 shutout over the Brandon Wheat Kings. Brooks and Steel also led the league in assists, with 87 and 81, respectively, while Brooks compiled a league-high 22-game point streak from Oct. 12 to Dec. 9 — collecting an overwhelming 48 points along the way.

“It’s incredible. Those two guys are amazing. Some of the stuff they do I just shake my head at it, I don’t know how they do it,” said Hobbs. “It’s pretty special and pretty amazing. They’re a huge part of our team.”

Even after grabbing onto the CHL’s No. 1 ranking early this season and very rarely letting go, the Pats still went back to work at the trade deadline. Paddock executed a handful of trades that Hobbs says gave Regina all they should need to defend their place as the league’s top seed.  From the added depth provided by centre Wyatt Sloboshan — picked up in a trade with the Spokane Chiefs — to the back-end presence of defenceman Josh Mahura — acquired alongside Jeff de Wit in a blockbuster trade with the Red Deer Rebels — Hobbs says Paddock managed to make the Pats a deeper, more complete team at the deadline.

“Mahura is a really good player, a guy who can score. And the same goes for Jeff and Wyatt. They’re just great guys and that’s huge for our team, having a good group of guys,” said Hobbs. “I guess you can’t go too far in hockey without meeting a good guy but I thought that was important, having good people on our team. It sure pays off when they play the way they do as well.”

Given their season-long streak of dominance, which included a country-best 24 weeks in the CHL’s top 10 rankings, the Pats will undoubtedly have a target on their backs as the puck drops on the playoffs. Thankfully, says Hobbs, it’s a symbol the Pats have become accustomed to wearing this season.

“We’ve kind of been gunned after all year. Teams bring their best to us every single game, every night with us being up in the rankings and that sort of thing,” said Hobbs. “Teams want to knock us off the top. I think it gives us more energy and more drive to play better when teams bring their best. It’s just exciting.”

Round 1 of the WHL playoffs kicks off on March 24. The Pats will be welcoming the eighth place Calgary Hitmen at the Brandt Centre for Game 1 of their series.