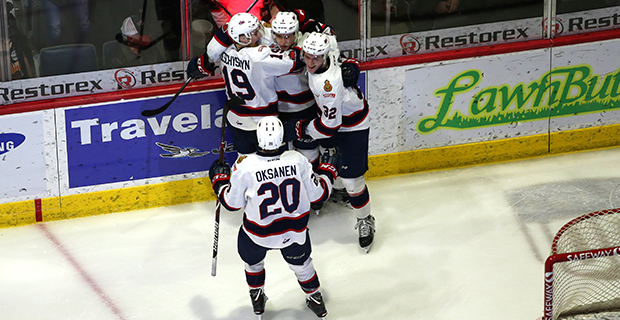 The long wait is finally over for the Regina Pats.

The Pats fell one goal shy of forcing overtime in Game 7 of their opening round Western Hockey League playoff series against the eventual champion Swift Current Broncos. While the setback has left them on the outside since April 2, Regina is ready to prove its place on the national stage as hosts of the 100th Memorial Cup.

They’ll be the only team that hasn’t hoisted a trophy this season, but the Pats established themselves as serious contenders after making some important additions at the trade deadline, and they’ve been itching to return to the ice in front of a roaring home crowd since their early playoff exit.

“We’ve been practising for what feels like forever,” said Pats centre Matt Bradley, adding he and his teammates were hoping they’d get another shot at Swift Current. “They’re a great team and they deserved to win the league, but now we get a second chance to be the heartbreaker and we’re really looking forward to it.”

Regina missed out on last year’s Memorial Cup after losing to the Seattle Thunderbirds in Game 6 of the WHL final and fell short of the Ed Chynoweth Cup again this season, but Bradley says there’s strictly no lack of confidence in Regina’s dressing room after nearly seven weeks of intensive practices and exhibition games while waiting for a shot at redemption.

“Some days it was two practices a day and one workout. It kind of varied, some days just one practice and we had a couple skill guys come in and help us out,” he said. “For the games we had some alumni like Connor Hobbs and Dawson Leedahl, and some (University of Regina) players like Zak Zborosky. It was pretty high-end talent to come out there and push us.

“The games really had to simulate playoff hockey, and for us, we treated it like an actual game. Those other teams have been out there for six more weeks than we have, so it was really good and we’re prepared for the test that we’ve got coming.”

Knowing they would be hosting the Memorial Cup for its 100th year, the Pats bolstered their roster with a handful of key additions who could very well tip the scales against the Canadian Hockey League’s best — starting with Bradley.

The 21-year-old Surrey product became the first significant move Regina made ahead of the Memorial Cup when he was acquired fro the Medicine Hat Tigers, along three draft picks, in exchange for goaltender Jordan Hollett last May.

The 6-foot, 190-pound centre says the new city quickly became a second home, as he went on to record 37 goals and 42 assists for a career-high 79 points in the regular season while becoming a prominent figure in Regina’s community. Bradley visited local schools to read to students and promote healthy lifestyles, raised $3,595 for breast cancer research through a personal campaign in October and volunteered his time to the Ranch Ehrlo Outdoor Hockey League — which provides inner-city youth and their families with access to recreational programs.

“I just wanted to come and get out in the community a little bit, get myself out there and try to make a little bit of a difference. They welcomed me with open arms,” said Bradley. “With the breast cancer foundation, the team and the community really got behind me for that. The amount of money we raised is phenomenal. It’s absolutely mind blowing, I didn’t expect to raise that much.”

The Pats went on to make a handful of big deals in approach of the trade deadline, the two biggest of which both came through the Saskatoon Blades. On Jan. 8, Regina made a move for Czech defenceman Libor Hajek, then two days later they called up the Blades again and acquired Edmonton Oilers prospect Cameron Hebig and 19-year-old goaltender Ryan Kubic. While the Pats gave up four players and five picks — including two first-rounders — to acquire the trio, Bradley says it has truly helped solidify an already-potent roster in Regina.

“Every single guy came in here and had an effect early. Guys like Cameron Hebig put up huge numbers, Libor on the back end was phenomenal and then Kubic in net. Every trade we made we definitely gained a huge asset,” said Bradley, whose Pats went 19-6-2-1 after the trade deadline to finish third in a grueling East Division battle with the Moose Jaw Warriors, Broncos and Brandon Wheat Kings. “The team really whipped into shape there quickly. It’s kind of disappointing to end the series the way we did there in the playoffs but we’re really looking forward to a second chance.”

Hebig went on to finish his season with 90 points — 32 of which came in 26 games with the Pats — while Hajek produced 14 points with a plus-5 rating on the back end and Kubic posted career-best numbers despite battling concussion symptoms down the stretch.

Bradley added Regina has been buzzing in the days leading up to the tournament and the atmosphere inside the Brandt Centre has been second-to-none all season — and he’s hoping the Pats will be able to ride that energy to the fifth Memorial Cup championship in their franchise’s history.

“Every game was sold out, or if not it was pretty damn close. It’s an awesome city to play in. The fans are great, they treat you amazing here and it’s going to be awesome,” he said. “Whenever we’re walking around we’ll get a couple comments, like ‘We’re all behind you,’ and little things like that. It’s really good for the fans too, all the celebrations and concerts going on down there, it’s a good time.”