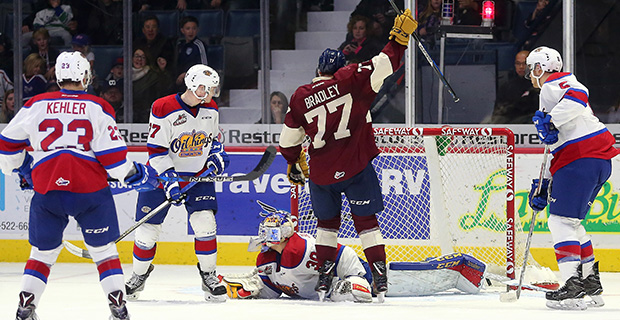 Matt Bradley is experiencing early success with the 2018 Memorial Cup host Regina Pats after being traded from the Medicine Hat Tigers in May. (Keith Hershmiller/Regina Pats)

Hockey is home to a wide range of statistics. Some can be the driving force behind a player’s rise to the professional ranks, while others are just for the sake of enjoyment. Regina Pats forward Matt Bradley has been the owner of both to start the Western Hockey League season.

With 22 points in his first 13 games, the 20-year-old centre is well on pace for a career year after starting his season at the Brandt Centre, but outside of all on-ice accolades, Bradley has a stranger stat. On Oct. 6, Bradley became the first player in the WHL to dress with two different teams in the exact same stall.

The 20-year-old centre was traded to the Regina Pats from the Medicine Hat Tigers in May. While he and the Tigers relocated from the Medicine Hat Arena to the Canalta Centre to start the 2015-16 season, construction on the team’s official dressing room and player facilities wasn’t completed until a few months ago. As a result, the Tigers spent their first two seasons at the Canalta Centre playing out of what is now the visitor dressing room, allowing Bradley to walk right into the same room he called home last season when he first entered the building with the Pats.

“I sat in the same spot I have for the past two years. That brought back a lot of great memories, a lot of thoughts of old teammates. It was a lot of fun,” said Bradley. “It was kind of weird playing in a different jersey and on a different bench, but it was fun playing against those guys. I played with them for a long time and playing against them was a good chance.”

While it’s certainly one of the strangest, Bradley’s dressing room stat isn’t the only one separating him from the pack to start the WHL season.

While he’s a proven 30-goal scorer, Bradley has been setting a new bar since taking the ice in Regina. Bradley’s 11 goals through his first 13 games are second only to Swift Current Broncos centre Tyler Steenbergen’s 21.

It’s a projection that’s been evidenced through Bradley’s statistics over the past few years. The Surrey product average 0.56 points per game in his rookie season. He bumped it up to 0.75 the following season before breaking the point-per-game barrier at 1.10 with 34 goals and 43 assists in 70 games last season.

But Bradley’s surge to start the season has taken him on a significant uptick. With 22 points through his first 13 games, Bradley is well on pace for career-bests across the board, and he’s on the verge of the coveted two points per game average at 1.69 while being held off the scoresheet just twice.

Bradley was drafted to the Montreal Canadiens in the 2015 NHL entry draft, but became a free agent when he went unsigned by the big-league franchise in the off-season. Thankfully, Bradley says, he’s found a new level with the Pats.

“It’s been good. The coaches believe in me,” said Bradley. “They let me play a creative game and they have a lot of faith in me.”

Part of Bradley’s early success is a direct result of his ability to put the puck on goal. The 6-foot, 190-pound righty sent a staggering 78 shots towards opposing netminders through just 13 games — that’s 13 more shots than anyone else in the league.

While the Pats didn’t get the jump they were hoping for after being named hosts of the 2018 Memorial Cup — stumbling out of the gate with an 2-3-1 record through their first six games — it didn’t take them long to regain their bearings and resume control of the East Division with junior hockey’s biggest stage waiting on the horizon.

“Team-wise we had to figure things out,” said Bradley. “But it’s been good.”

Regina last hosted the Memorial Cup in 2001. The Red Deer Rebels won the event tournament with a 6-5 overtime victory over the QMJHL’s Val-d’Or Foreurs in the final.