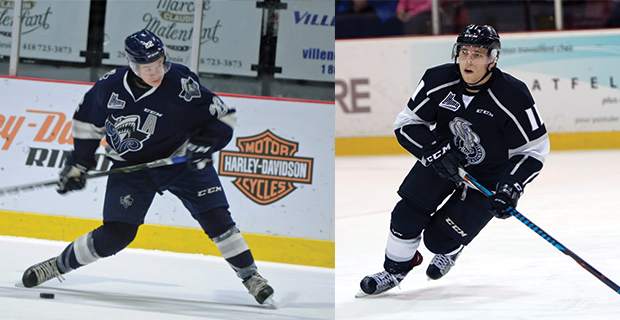 QMJHL’s leading scorers Tyler Boland (L)  Vitalii Abramov (R) are big on talent and have all the offensive tools to excel at next level. (Courtesy of the QMJHL)

I went to check out the two top scorers in the QMJHL the other night.

The scenario was ideal as Tyler Boland the league’s top point getter was in Gatineau with his Rimouski Oceanic for a date with the Olympiques.

For the Piques, Vitalii Abramov has been lighting it up lately in this, his second year in the CHL and is nipping at Boland’s heels in second place.

It was obvious these guys are legitimate offensive weapons.

In warm-ups, they were doing stuff with the puck that the average player can only dream about perfecting.

Toe drags at speed, intentionally taking passes off their skates without breaking stride and snapping the puck top shelf behind the goalie was the norm from the pair.

After 59 games, Boland has accumulated 42 goals and 53 assists for 95 points in his overage season.

The native of St. John’s, Newfoundland finished with 54 points last year and 36 the season before, which is nothing special.

But this campaign the 6-foot, 181-pound centre has been electric.

His first two steps are above average, he possesses a lightning fast release and has a keen sense of using and finding his teammates. Boland is the go-to guy on the Oceanic’s top power play unit.

Boland started the game for Rimouski that night and Gatineau matched with their top checking line.

It was a chess match all night, with Oceanic coach Serge Beausoleil trying to get Boland out there without Gatineau’s hound dogs all over him taking away his time and space.

But the Olympiques did just that and Boland was limited to one assist and finished the night -2 as Gatineau defeated Rimouski 3-2 in overtime.

But to give credit to the Oceanic, they recognized that Abramov is a vital component of the Gatineau Olympiques offence.

The Russian-born centre was kept off the score sheet courtesy of the Oceanic and their strong defensive play which paid special attention to the shifty speedster.

Last year, Abramov was named the 2015-16 QMJHL Rookie of the Year after notching 38-55-93 points in 63 regular season games and has been keeping pace with Boland since the two-player scoring race became serious in late January.

Despite not seeing his name in the game summary, the 5’9, 170-pound product of Chelyabinsk, Russia was as slippery as an eel, slipping checks and changing speeds with ease.

The Columbus Blue Jackets made a wise decision when they selected the 19-year-old in the third round (65th overall) at the 2016 NHL Entry Draft.

Abramov is lightning fast off the hop and does everything at pace. He loves to make lane changes going from the middle of the ice to either his right or left, which left many Oceanic defencemen shaking their heads in frustration.

In the offensive zone, he identifies shooting lanes within a split second and unloads an accurate shot without hesitation which is a nightmare for the opposition’s goalie.

With the end of the regular season rapidly approaching, each and every game is important for both Rimouski and Gatineau as they try to finalize and improve upon their playoff ranking.

After 60 games, Gatineau is occupying 11th place in the overall standings with 60 points.

Rimouski has recently slipped to 14th placed, with  53 points in 59 contests.

You know that Abramov and Boland will be doing whatever they can to help their team hit their stride once the postseason begins.

For the duo, putting up points and creating offence will be their mandate.

Their team’s success will be the priority but I’m sure that getting their name on the Jean Béliveau Trophy as the league’s top scorer will also be a consideration.

Either player would be a worthy winner.