One Title Down, One To Go for Blainville-Boisbriand's Joel Bouchard 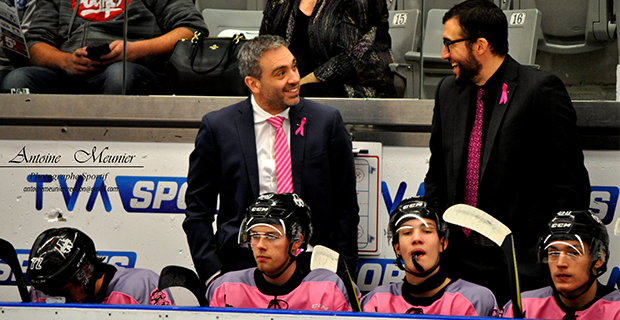 Joel Bouchard is tickled pink for a couple of reasons.

Besides sporting a stylish tie in the month of October to honour Breast Cancer Awareness, his giddiness centres around his quest for success this season along with the time, dedication and energy needed to accomplish these lofty goals.

He made the initial checkmark earlier this month when Canada won gold at the 2018 IIHF U20 championships in Buffalo, New York.

Bouchard is part of Hockey Canada’s U20 management team and played a large role in the team’s success when it came to player identification and selection.

“The process took a year to evaluate and select the players that could compete against the best players in the world,” Bouchard said in an interview, outside the Armada dressing room.

“We picked a team that we all thought would have success for the entire tournament and be able to work with and excel with our head coach, Dominique Ducharme and his coaching staff.”

Bouchard and company were right on as Canada won the gold medal for the 17th time in WJC history.

With one accomplishment off this year’s bucket list, the ex-NHL defenceman and two time world junior champion (93 & 94) with Canada returned to his junior club with the intention of bringing a league championship to Blainville-Boisbriand which is approximately 40 kilometres from Montreal.

The Armada made it to last year’s President’s Cup but ended up getting swept (4-0) against the high powered Saint John Sea Dogs.

This season Bouchard has his squad near the top of the QMJHL pack once again with a legitimate shot of playing well into May.

After 42 games, the Armada were the proud owners of a 30-9-2-1 record and 63 points, good enough for second place overall.

BBA trailed the Halifax Mooseheads by one point for top spot in the league but had played three less games than their Nova Scotia-based rival.

When asked what he learned from last spring’s President’s Cup loss, Bouchard paused for a second before answering the question with several responses.

“I learned a lot from last year’s playoff but things change from year to year. We need to grow as a team, progress and manage each series.

Handling injuries and rest are two important factors that need to be addressed properly as well.”

Bouchard did not neglect his club team while he was in Buffalo and sent a message to the rest of the QMJHL that he and the Armada mean business when he trade for F Drake Batherson.

“He’s a good person and teammate. I was really impressed with his play at the World Juniors. I was intrigued with his progression at Canada’s camp to the main tournament and feel he can be a game changer for us. He wants to win and grew a lot as a player skating for Canada.”