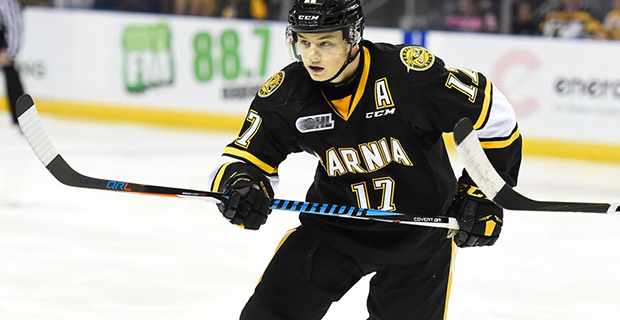 Sarnia Sting forward Drake Rymsha, selected in the fifth round (138th overall) by the Los Angeles Kings in the 2017 NHL Entry Draft, has signed a three-year, entry-level contract with the Kings.  (Aaron Bell/OHL Images)

SARNIA STING
Sting forward Drake Rymsha is being fitted for a new crown.

Selected by the Los Angeles Kings in the fifth round (138th overall) in the 2017 NHL Entry Draft, the Huntington Woods, Mich., product has signed a three-year, entry-level deal with the club.

The six-foot, 187-pound centre who turned 20 in August put up 31 goals and 42 assists in 68 regular-season games with the Sting last season. He added three goals and six assists in 12 playoff games.

The graduate of the Toronto Jr. Canadiens Bantam and Midget programs also played in the OHL for the London Knights and Ottawa 67’s.

The team made the announcement Aug. 25.

MISSISSAUGA STEELHEADS
The Steelheads have landed another piece fill out their roster puzzle.

The squad has announced that forward Cal Christner has committed to the team, entering into a standard player agreement with the club.

In his final season of Midget, spread between the Waterloo Wolves Minor AAA and Major AAA programs, Christner, who turns 17 in December, scored 10 goals and added 20 assists in 31 games.

The team made the announcement Aug. 21.

LONDON KNIGHTS
The London Knights are adding import talent to the roster for the upcoming season. The Knights have agreed to an OHL Standard Player Agreement with Belarusian import pick Vladislav Kolyachonok.

“We are very pleased to have signed Vladislav and look forward to him playing in London next season,” said Knights associate general manager, Rob Simpson. “Vladislav is a strong addition to our team and will be a great two-way threat from our blue-line.”

The 17-year-old defenceman, who turns 18 in May, is entering his NHL Entry Draft-eligible season. He scored five goals and added 15 assists in 43 games last season playing for the Belarus National U18 squad.

The Knights made the announcement Aug. 23.

LEAGUE
As the OHL season rapidly approaches, teams across the league are gearing up with training camps.

As camps get underway, players will take part in fitness testing, skills-development sessions, practices and scrimmages under the watchful eyes of management in preparation for 2018-19 campaign.

The majority of on-ice sessions are open to the public, providing fans their first opportunity to see returning talent and welcome new prospects in anticipation of the upcoming season.