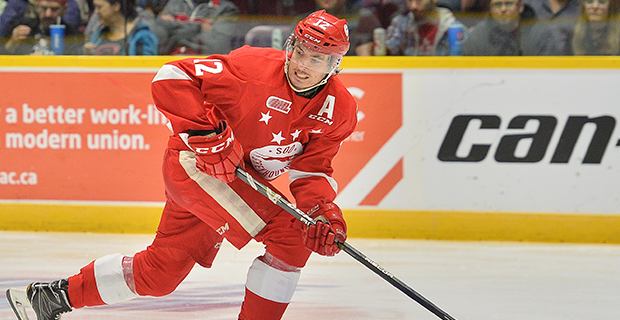 Do Boris Katchouk and the Sault Ste. Marie Greyhounds have enough gas in the tank after going through a gruelling seven-game OHL Western Conference semifinal series against the Owen Sound Attack? (Terry Wilson/OHL Images)

The final four is now set in the OHL and it isn’t much of a surprise who’s there.

The Sault Ste. Marie Greyhounds and Hamilton Bulldogs, top seeds in the Western and Eastern Conferences respectively, have advanced to their conference finals.

Accompanying them are the second-ranked Kitchener Rangers in the West and the third-seeded Kingston Frontenacs in the East.
Here’s what you need to know about those matchups.

It’s a 1 vs. 2 matchup in the Western Conference as the top-ranked Greyhounds get set to take on the second-seeded Rangers.


As one can expect, the playoffs got harder for both teams as they moved on, and they can expect to be tested even further as both pursue a spot in the final.

Through the regular season, the Soo’s dominance cannot be overstated.

With a deep squad led by Morgan Frost, Boris Katchouk, Conor Timmins and Matthew Villalta in goal, the Greyhounds led the league in both goals for (317) and against (186) by a wide margin. They were atop the CHL weekly rankings for most of the season. The Rangers have been quite the formidable opponent themselves this year.

Although the Greyhounds swept their four-game regular series against Kitchener, three of those matches were one-goal victories.

How Sault Ste. Marie got here
The Greyhounds got past the Owen Sound Attack, but were pushed to the limit in the process. The series went through the maximum seven games and the final two were absolute barn burners.

Owen Sound forced game seven with a 7-1 win, and just when it looked like the Greyhounds were cruising with a 7-2 third period lead in the series decider, the Attack stormed back, but the Soo held on to win 9-7.

It was night and day compared to the Greyhounds first-series sweep over the Saginaw Spirit.

Katchouk has led the Soo in playoff scoring and had a 10-point series against Owen Sound. In Game 7, he had a hat trick, along with an assist.

How Kitchener got here
The Rangers gradually wore the Sarnia Sting down through their series, and when it was time to deliver the final blow, they did so in convincing fashion.

Kitchener finished second in the Western Conference even though they were seven points behind the Sting in the standings. Winning the Midwest Division gave them the edge, but the Rangers proved they were stronger in their playoff series.

The Sting, owners of a 46-17-4-1 record that only the Greyhounds were able to exceed, had a 2-1 lead in the series before Kitchener rallied back with three straight wins, including a 6-2 series clincher. Kitchener started the playoffs with a six-game win over the Guelph Storm.

Brown is the league’s leading scorer through the first two rounds with 21 points in 12 games.
Prediction: Greyhounds in six

The Bulldogs and Frontenacs have gotten the most out of their investments and are in the Eastern Conference final as a result.


Two of the league’s biggest buyers at the trade deadline, Hamilton and Kingston will duke it out in what looks to be a dandy of a matchup.

For those who need a refresher, the Bulldogs loaded up with World Junior gold medalist Robert Thomas, speedy forwards Ryan Moore and Nicholas Caamano and veteran defencemen Riley Stillman and Nicolas Mattinen before the trade deadline.

Kingston kept up in the arms race by acquiring four Memorial Cup winners: Gabriel Vilardi and Sean Day from the 2017 champion Windsor Spitfires and Cliff Pu and Max Jones from the 2016 champion London Knights.

The series will be a rematch of one of the conference quarterfinals last year, a series Kingston won in seven games, with game seven going through overtime.

In the regular season, the East Division rivals met six times, and although Hamilton won four of them, five of those six matches were decided by one goal and four games went to overtime or shootout.

They were also the top two teams in terms of goals against average in the Eastern Conference through the regular season.

How Hamilton got here
The Bulldogs steamrolled their way past the Ottawa 67’s in the first round, but encountered a tougher test against the Niagara IceDogs in their five-game second-round series.

That was the same number of games they needed to dispose of the 67’s, but Niagara made it a tougher ordeal for Hamilton by making the first three games go through overtime.

If it weren’t for Stephon Dhillon’s efforts while facing more than 40 shots a game in net for Niagara in the series, Hamilton might not have had nearly as hard of a time advancing onto round three.

Thomas and Moore tied for the Bulldogs’ lead in scoring through the first two rounds of the playoffs.

How Kingston got here
The Frontenacs have gotten into the habit of going on runs after falling behind in each of their first two series.

After trailing 1-0 in the first round against the North Bay Battalion and 2-0 in round two against the Barrie Colts, Kingston stormed back with four straight wins to close out each season.

Vilardi has been hampered by injuries the past two seasons, but has found his stride with the Fronts, coming in at just a few ticks shy of the two-points-per-game mark in both the regular season and playoffs.
Prediction: Hamilton in six