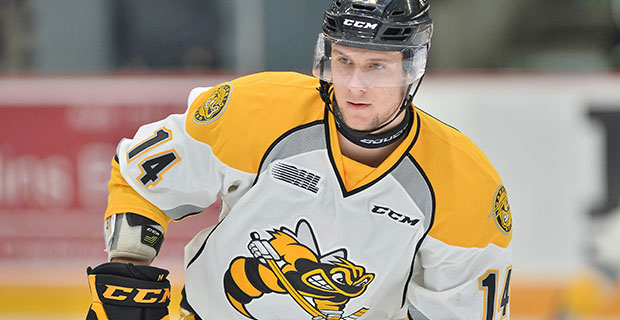 It’s not yet official, but we can take that much away from the CHL Import Draft after seeing him in a Barrie Colts jersey and hat while expressing his excitement during a conference call after he was selected first overall on Wednesday.

Projected to be the top pick in the 2018 NHL Draft, the 6-foot-2 Russian forward is expected to bring instant offence, perhaps in tandem with countryman and Tampa Bay Lightning prospect Alexei Lipanov, who Barrie recently signing after taking him in last year’s draft.

When it comes to the Import Draft, most teams swing for the fences in an attempt to land top European talent. Given Svechnikov’s track record, the Colts hit one out of the park.

He spent last season with the Muskegon Lumberjacks in the United States Hockey League and recorded 58 points (29 goals and 29 assists) in 48 games.

He also played for Russian national teams on a number of occasions, including the World Jr. A Challenge, where he scored a tournament-record eight goals.

Svechnikov will hope to join a slew of other recent Import Draft picks like Mikhail Sergachev, Alex Nylander and Pavel Zacha who came to the OHL for their NHL Draft year and played their way into the top 10 at the NHL Draft.

It’s often considered a risk taking players of that calibre since they don’t always report to their clubs. They have options when it comes to deciding between major junior and playing professionally, whether it’s with their European team, NHL club or within its farm system.

That’s why the best players in the draft aren’t always taken within the first couple of picks of the Import Draft.

It comes down to the relationship CHL teams can build with NHL franchises and the player’s agent as major junior general managers try to sell players on the program they have to offer.

Even top players who are eligible for the upcoming NHL Draft aren’t always locked in on the junior club they’re drafted by.

Neither of them came over to play last season, but there’s the chance they could this year since they were picked in the 2017 NHL Draft and the teams they were picked by may convince them that the CHL is best for their development.

It looks like it could be what’s best for Svechnikov’s development as he’s already played a season in North America and he’ll be sure to get maximum exposure playing in arguably the best developmental league out there.