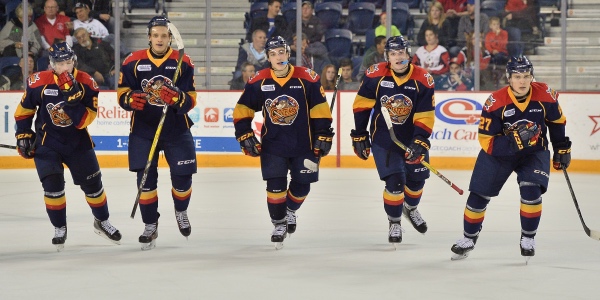 The Erie Otters haven't faltered once in playoff action and swept the Sarnia Sting in Round 1 of the OHL postseason. (Terry Wilson/OHL Images)

The OHL’s Erie Otters, the WHL’s Regina Pats and the QMJHL’s Saint John Sea Dogs have been the CHL’s darlings all year. Now, the three teams are undefeated and on their way to fulfilling their destiny to create what could be one of the greatest Memorial Cups in recent memory.

Sea Dogs Navigate the Oceanic
The Sea Dogs completed their four-game sweep of the Rimouski Oceanic last night, and were the first team in the CHL playoffs to complete their series. Thomas Chabot led the way with eight points, including the winner in game two, where he scored twice and added an assist. You can bet that Chabot is hungry for a long playoff run after his disappointing exit from the World Junior Championships, where Canada was defeated by the USA in a hugely entertaining final. He is tied for first in playoff scoring.

Although goaltender Callum Booth has been tremendous, he hasn’t had much work to do; the Sea Dogs have outshot the Oceanic by an average of 17 shots per game. Still, when Booth has been called upon, he has been steady and reliable. NHL prospects Mathieu Joseph (3 goals, 4 assists) and Bokondji Imama (3 goals, 2 assists) have also turned in terrific efforts, but it is the mature Sea Dogs defence, including Simon Bourque and Jakub Zboril, that deserves most of the praise.

Otters Not Feeling the Sting
The Otters also swept their first-round series last night, defeating the Sarnia Sting 9-3. That means the team racked up 29 goals for an insane average of 7.25 per game – the highest per-game average of any team in the CHL thus far.

The usual suspects kicked in for the Otters: Alex DeBrincat, Taylor Raddysh and Dylan Strome are 1-2-3 in OHL playoff scoring, with Anthony Cirelli (6th) and Kyle Maksimovich (8th) not far behind. With 12 goals against, the Otters aren’t quite as tight as they might like, but that’s natural in a series defined by high-octane offence.

Regina Stands Pat Against Hitmen
The CHL’s top-ranked team with 52 regular season wins, the Regina Pats are up 3-0 on the Calgary Hitmen, and everyone involved (except perhaps the Hitmen) expects this series to wrap up tonight. 2017 CHL scoring champion Sam Steel (50 goals, 81 assists, 131 points) is off to a predictably stellar start, with nine points. He is supported by Adam Brooks, who has two of the club’s three game-winners.

Twenty-year-old undrafted goaltender Tyler Brown continues to help the club remain one of the hardest teams to score against, and has raised his game considerably to a stat line of 2.67 GAA and .946 SP. Expect him to play the best hockey of his career throughout this playoff in the hope of earning a professional tryout this summer.

To say that these three teams have the best chance of winning their respective leagues is no bold claim – they’ve stood out all year. Anything could happen though, and they will have to make it past some deadly competition to advance. Stay tuned with HockeyNow’s roster of bloggers for more on this exciting playoff season.