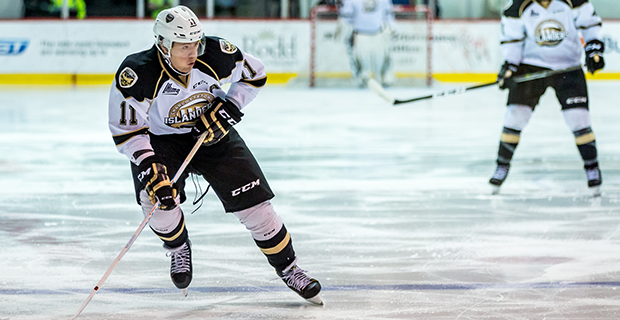 The Charlottetown Islanders have been playing in another team’s shadow all season—namely, the star-studded Saint John Sea Dogs (say that five times fast!). Spoiled with a few upper-tier talents of their own, the Islanders aren’t just an obstacle in the path of any QMJHL team with Memorial Cup aspirations.

Unfortunately, the Islanders haven’t had much luck in the playoffs. Since the team relocated from Montreal in 2003, it has never advanced past the second round. If ever there were a chance for the team to break out and make some postseason noise, this would be it.

It won’t be easy of course, but their roster—strengthened by key deadline additions—should garner plenty of faith in the stands at Charlottetown’s Eastlink Centre.

The team’s dangerous, crafty group of forwards are a different animal than the group that centre Filip Chlapik (OTT) tried to carry last season. Now that Chlapik has a similarly talented group around him, his own production has taken off. Chlapik has 32 goals and 55 assists for 87 points on the season.

Chlapik also benefits from the return of long-time linemate Daniel Sprong (PIT), who has been ripping it up since returning from injury in January, with 31 goals in 28 games since (he also has 21 assists for 52 points). Sprong was recently named CHL Player of the Week for the week ending March 12th. During that period, he scored four goals and three assists in a game against the Moncton Wildcats.

The team bolstered itself at the deadline by acquiring three top six forwards. In a flurry of deals that were all dependant upon each other to become viable, the team acquired left wing Adam Marsh (DET) and Francois Beauchemin from Val-d’Or, and Alex Dostie (ANA) from Gatineau. Although the trade wasn’t popular for shipping out favourites Cody Donaghey and Jake Coughler, the move gives Charlottetown two scoring units that can rival any in the country.

Solid NHL Prospects in the Backend

The Islanders also acquired Vancouver Canucks prospect Carl Neill from Sherbrooke. The two way defenceman is having a career year as an overager, with 65 points in 65 games. He joins Guillaume Brisebois, another Canucks prospect with superior two-way talents. Along with 46 points, Brisebois has an impressive plus-38 rating.

Silky smooth Nicolas Meloche is onboard thanks to yet another deadline deal with Gatineau. Also in his last season as a junior, his numbers are almost identical to Brisebois’ (46 points, plus-34).

The trades Charlottetown made at the deadline (I haven’t even mentioned them all) give the team a new look, but fans won’t get the chance to see this lineup for very long. As is often the case with these kinds of teams, the Islanders will be hard-pressed to duplicate this season’s success next year. Nearly every one of the team’s most effective players are due to move on during the summer—a recurring theme among the CHL’s best. If you live in PEI, make sure you get the chance to see this team while it lasts.