Around the OHL: Rangers forward signs with Stars, new bench boss in the Soo 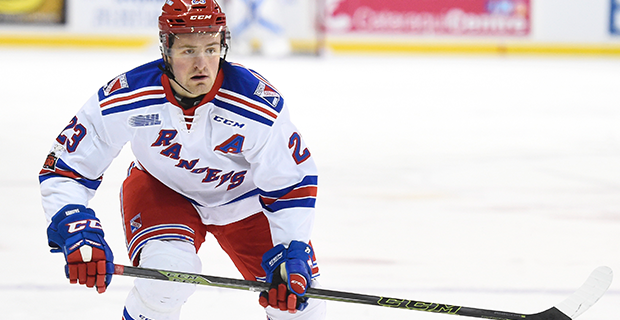 His goals total was tops on the club, while his assists total ranked second at season’s end for the Rangers.

In 19 OHL playoff games this past season, Mascherin registered nine goals and 15 assists for Kitchener.

The team made the announcement July 16.

NEW BENCH BOSS IN THE SOO
The Soo Greyhounds have announced that John Dean has been named the team’s new head coach.

Dean joins the Greyhounds after spending last season as head coach and assistant general manager of the Ontario Junior Hockey League’s Toronto Patriots. The 37-year-old coach led the club to a league-best 40-8-3-3 regular-season record before being named the league’s coach of the year. He was also head coach of Team East at the CJHL Prospects-Game.

The team made the announcement July 12.

In early April, Timmermans teamed up with Erie’s Iron Empire Clothing to design, print, and sell T-shirts, with all proceeds assisting the Humboldt community following news of the crash involving the team bus of the Saskatchewan Junior Hockey League team.

A total of 815 Timmermans’ shirts were sold throughout the United States and Canada.

FRONTENACS PROMOTE FOSTER TO HEAD COACH
The Kingston Frontenacs have announced the promotion of Kurtis Foster to the team’s head-coaching position and the hiring of Luca Caputi as associate coach.

Foster takes over the bench after working as an assistant coach with Jay Varady in Kingston last season. Earlier in July, Varady signed on as head coach with the American Hockey League’s Tucson Roadrunners.

An Ottawa-area native, Foster was an assistant coach with the Peterborough Petes before joining the Frontenacs, who made it to the OHL Final Four  this past season in the playoffs.

Caputi comes to Kingston following three seasons as an assistant coach with the OHL’s Guelph Storm.

The Frontenacs announced the move July 16.