Around the CHL: Final Playoff Push 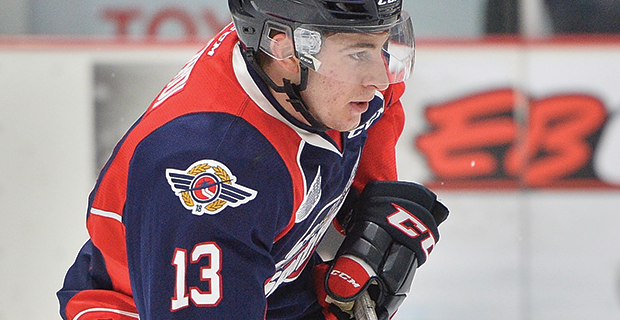 As teams in the WHL, OHL and QMJHL suit up for their last games of the season, we’re seeing leaders hold steadfast and others jumping ahead in the knick of time. Here’s a look at the top performers and contenders in the CHL as the countdown to the postseason begins.

Sea Dogs Move into Top Spot in CHL Rankings
Bolstered by the likes of Julien Gauthier and Callum Booth at the trade deadline, the Saint John Sea Dogs have assumed the top position on the CHL Top Ten Rankings, command of the QMJHL and become a favourite to contend for the Memorial Cup in May. Their current five-game winning streak includes a 9-3 drubbing of the Rimouski Oceanic. The team’s surge displaced the Regina Pats and Erie Otters from the 1-2 positions to 2-3.

The Charlottetown Islanders moved up to sixth, dropping the Owen Sound Attack down to the former’s eighth position. Meanwhile, the Moose Jaw Warriors moved into the 10th position, making the rankings for the first time this season.

Alex DeBrincat tops 60-goal plateau
Alex DeBrincat’s scoring exploits have continued into the year’s final stretch. The young sniper scored goals 59 and 60 on Sunday against the Niagara IceDogs. It was his 19th multi-goal game of a season in which he has run away with the scoring title. The nearest comer is Tyler Wong of the WHL’s Lethbridge Hurricanes, who has 48. After playing in Dylan Strome and Connor McDavid’s shadow, Debrincat could be the most under-the-radar scorer the league has ever produced.

Vilardi Peaking at the Right Time
Although Gabriel Vilardi slumped briefly in January, a dynamic performance at the CHL Top Prospects Game seems to have jump-started the draft-eligible youngster. He has 19 points in last 10 games, a pace that is well beyond the point-per-game he averaged throughout the season.

He was recently awarded CHL Player of the Week honours for the week ending March 5. During that time, he notched four goals and five assists in three games. Vilardi is currently fourth on the ISS Top 31 Prospects ranking.

WHL Scoring Race Set for Wild Finish
Although the QMJHL and OHL both have exciting scoring races of their own, neither quite compare to the barnburner out west. Five players could potentially finish with 50 goals, including:

Even more remarkably, 11 of Steenburgen’s goals are game winners, compared to 10 of Wong’s. That’s a lot of points on the board from two players. With a handful of games left in the season, we’ll all be watching to see how this ends.

2017 Canada Russia Series Coming to PEI
The CHL has announced the hosts of the 2017 Canada Russia Series, and the list contains a pleasant surprise for east coasters. For the first time, the series will visit Prince Edward Island when Russia takes on the Charlottetown Islanders on Tuesday, November 14th. The full schedule follows.