Armada and Sea Dogs Square off in President’s Cup Final 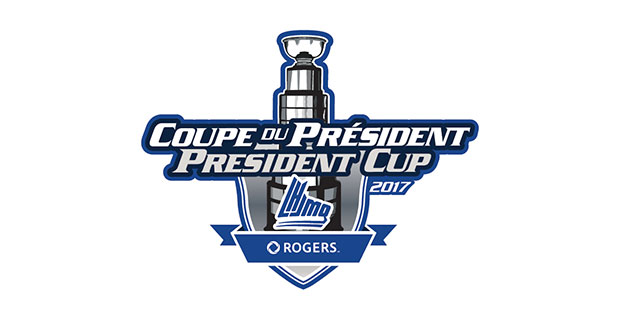 The stage is now set for this year’s QMJHL final.

In mid-March, 16 teams began their quest for the 2017 President’s Cup with eight different playoff series.

Almost six weeks later that field of 16 has been whittled down to 2 teams.

After countless hours of travel throughout Quebec and the Maritimes almost over for both squads, the Saint John Sea Dogs (1) and Blainville-Boisbriand Armada (5) will meet up in a best of seven series.

Game 1 is scheduled for Friday, May 5 in Saint John, New Brunswick.

A trip to the 2017 MasterCard Memorial Cup later this month in Windsor, Ontario will be on the line for both organizations.

This will mark the third time that Saint John will play for all the marbles in the Q.

In 2010, they lost (4-2) to the Moncton Wildcats in the league’s only all-Maritime Division final.

The Sea Dogs went on to win the MasterCard Memorial Cup that spring with a 3-1 victory over the Mississauga St. Michael’s Majors.

It’s all new for Blainville-Boisbriand who will be making their inaugural appearance in the league final.

The Sea Dogs steamrolled through their opposition in the first three rounds of the postseason with an impressive 12-1-1 record.

The Sea Dogs swept the Rimouski Océanic and Val-d’Or Foreurs in four games in their first two series.

The Chicoutimi Saguenéens posed a mild threat to Saint John in the semifinals, taking the Sea Dogs to six games before bowing out to the 2016-17 regular-season champs (4-2).

In 12 playoff contests, Saint John scored 66 times and gave up just 27 goals against.

Their 88.5 penalty killing percentage was top notch while their power play struggled at 15.4% which was way below their regular season average which saw the Sea Dogs clicking at a 29.9 % rate.

The Sea Dogs are fast and push the pace every shift. They have four solid forward lines with six NHL picks that can play in any situation.

As for the Armada, they earned their way to the championship with a four-game, first round sweep of the Drummondville Voltigeurs.

In Round 2, Blainville-Boisbriand was pushed to the brink of elimination when the Acadie-Bathurst Titans took a commanding 3-1 series lead.

The Titans jumped out to a 3-1 series lead before the Armada roared back with three straight victories to advance to the final four.

From there, BBA had the challenge of taking on the Charlottetown Islanders and their offensive juggernaut in a semifinal showdown.

The Islanders entered the post season with the most goals scored (303) and featured several talented players including Daniel Sprong, Filip Chlapik and Alex Dostie but that didn’t intimidate the Armada, who went on to win the series four games to one.

Watch for Blainville-Boisbriand to continue to do all the things that enabled them to reach the final.

They play hard and never quit on a puck. They are not quite as star studded as their Saint John adversary but the Armada are a sound, well coached team that plays with a ton of discipline.

Speaking of Montembeault, the overage goaltender has been tremendous between the pipes during his team’s playoff run.

He and Saint John’s Callum Booth are 1 and 2 when it comes to playoff goaltending statistics.

Others to watch for in the Armada line-up include F Alex Barré-Boulet who leads the Q in playoff scoring with 14-15-29 points in 16 games.

Barré-Boulet has proven to be a tremendous acquisition for BBA after Armada GM and head coach Joel Bouchard made a trade for him back in January.

Coaching or lack of it will not be an issue in this series. Both teams are led by seasoned hockey men.

Saint John is in the capable hands of Danny Flynn who has a lengthy list of coaching accomplishments under his belt.

Currently in his second season behind the Sea Dogs bench, Flynn spent time as an assistant coach for the Buffalo Sabres and the New York Islanders.

In 1993, Flynn was an Assistant Coach with the OHL Sault Ste. Marie Greyhounds when the team won the Memorial Cup.

In addition, Flynn coached the St. Francis Xavier University men's team to the CIS (now U SPORTS) national championship in 2003-04.

Between 2007 and 2013, Flynn served as the head coach and general manager for the Moncton Wildcats where he led the Wildcats to a pair of QMJHL championships.

The Armada is led by Joel Bouchard, a former NHL defencemen who was the driving force behind the franchise’s move from Montreal to Blainville, Quebec in 2011.