"Rocky Hockey": Late bloomers still punching for a shot at the pros 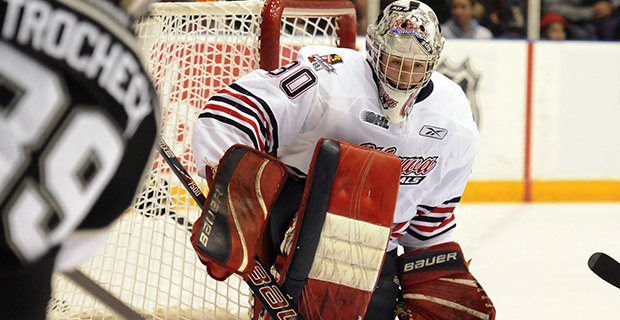 Former Oshawa General and current Queen's University netminder Kevin Bailie is an example of the many talented young hockey players who are initially overlooked by NHL scouts and must find another road to chase their NHL dreams. (Photo by Aaron Bell/OHL Images)

At first glance, Rocky and hockey don't seem to have a whole lot in common.

Rocky is the iconic film that won the Academy Award for Best Picture in 1976, launching a franchise that made Sylvester Stallone richer than Sidney Crosby.

But the only cursory hockey connection to the "Italian Stallion" genre?

The romantic scene at a Philadelphia skating rink (in truth, the arena was actually in Santa Monica, California) that features Rocky Balboa lumbering around the ice in street shoes while his beau-to-be, Adrian, tip-toes in figure skates trying to keep from falling on her butt while listening to Rocky's life story. In the background, you can spot a banner for the "Philadelphia Blades" hanging on the arena wall; an ode, perhaps, to a made-up minor pro hockey team. (Although in 1972, the Philadelphia Blazers did play in the World Hockey Association; some very temporary competition for the NHL Philadelphia Flyers.)

Still, you can definitely find the indelible Rocky spirit in hockey. The Flyers, for instance, have always packed a ferocious Philly punch, especially in the "Broad Street Bullies" era of the 70's. A number of hockey players, meanwhile, have also followed in Rocky's footsteps by "going the distance" to realize their dreams.

Chris Tanev – Deemed too small to play Triple A, he almost quit hockey in high school. Then, a sudden growth spurt provided new life and Tanev is now a mainstay on defence for the Vancouver Canucks.

Mark Giordano – Like Tanev, Giordano was never drafted by an NHL club. But after improving his game in Russia, Giordano landed a tryout with the Calgary Flames, where he now serves as team captain.

Joel Ward – Also bypassed in the NHL draft, Ward put together four solid years with the University of Prince Edward Island Panthers. He's now into his ninth season as a dependable NHL forward, currently with the San Jose Sharks.

As it turns out, Canadian Interuniversity Sports (CIS) hockey offers a beehive of Rocky Balboa's.

Meet the "one-two punch" of Kevin Bailie and Spencer Abraham.

Teammates with the Queen's University Golden Gaels in Kingston, Ont., Bailie and Abraham are both hoping for a "shot at the title"; or at least an opportunity to prove they're capable of playing professional hockey.

Bailie is a 24-year-old goalie from Belleville, Ont., while Abraham is a 22-year-old defenceman who hails from Campbellville, Ont. Both played a huge role in the CIS All-Stars 5-4 upset victory (another "Rocky" tale) over the 2016 Canadian World Junior squad; a Dec. 12th Toronto exhibition game that saw Bailie make 40 saves, while Abraham scored the shootout winner.

"That was really cool," enthused Bailie. "Everyone dreams of playing for Team Canada. I didn't get that opportunity, so it was fantastic to take part in another way. I'm also very passionate about our league and everyone on the team has a huge sense of pride for the CIS, so it was awesome to share our product and display our skill."

Following a solid, but unspectacular, five-year run in the OHL, Bailie has been the perfect example of a "late bloomer". He was named CIS rookie-of-the-year in 2014, and this season he boasts a Canada-best .942 save percentage. Coupled with his strong performance against Team Canada in front of a building full of NHL scouts, Bailie's abilities are suddenly receiving increased attention.

"Since that game, I've been contacted by about four or five NHL teams who've expressed interest in signing me to a tryout agreement," said Bailie. "It's been really flattering, but this summer is going to be a real crossroads. I'm getting ready to enter law school so if I don't feel any of the offers are substantial, it's time to get on with another aspect of life."

(Okay. There is one difference between hockey and Rocky. Let's face it. You'll likely never see a Queen's grad being forced to take a job in a meat packing plant.)

Abraham, meanwhile, is also looking at a future that could include law school. At the moment, however, he's "all in" when it comes to taking a shot at pro hockey.

"I definitely want to give it a try," said Abraham. "My game is all about skating and puck handling and I really believe I could use those skills to land a position in a European pro league."

Abraham, the 2015 CIS Rookie of the Year, is obviously a confident player – a character trait he had the chance to hone with the OHL Erie Otters after spending two years going head-to-head at practice every day with a certain young phenom named Connor McDavid.

"I've never seen anyone with Connor's skill level," marvelled Abraham. "Getting the opportunity to improve my game to try and keep up with him was a real eye-opener and a great way to learn what I need to work on to get to the next level."

There are hockey people willing to help players such as Bailie and Abraham get to that "next level".  Jadan Claire, 25, is the Founder and CEO of "Scout Zoo International", a Vancouver-based scouting service that offers players a second chance if they feel they've been overlooked.

"I played up until the Triple A Midget level," explained Claire. "And then I was a late cut at a couple of junior camps. That's when I packed it in, but I wish I would've been more aware of some of the other options out there. Going over to Europe, for instance, is a great experience and a great life lesson if you've got the talent to do it."

Scout Zoo is attempting to open some doors by offering a multi-faceted plan that includes getting advice on your game from a team of former NHL scouts. For a reasonable fee, a player can place video highlights of their individual performance on the Scout Zoo website and then have it analyzed by a group of veteran "bird dogs".

"These are guys who spent 35-50 years tracking players for NHL teams," pointed out Claire. "They can't really handle the travel any more, but they still have tons of knowledge and they want to continue giving back to the game."

So, with "Hockey Rocky's" such as Kevin Bailie and Spencer Abraham climbing into the ring to take their shot and well-meaning "Mickey's" like "Scout Zoo International" working the corners for hungry athletes, it's clear that the puck dream isn't over until the final bell sounds.