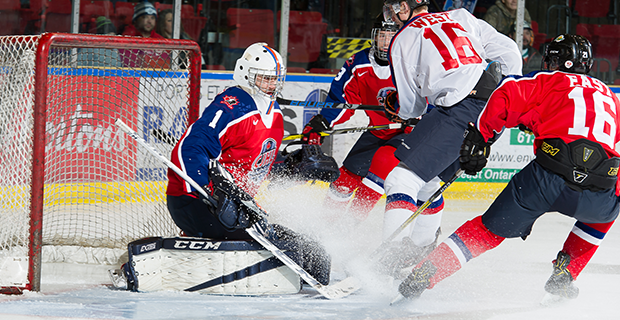 The stars were out in Cornwall on Jan. 25.

That would be many of the top Junior A hockey stars. They came to the eastern Ontario city to participate in the annual Canadian Junior Hockey League’s Prospects Game.

Forty players, representing nine of the 10 circuits that comprise the CJHL, competed in the match.

Officials from the National Hockey League’s Central Scouting had plenty of input into those who were selected to take part in the match. All of the participants are eligible to be chosen in this year’s NHL Entry Draft, scheduled for June 23-24 in Chicago.

Team West, comprised of players from leagues in the country’s four western provinces, eked out a 4-3 triumph over Team East, which featured players from five eastern loops.

This marked the 12th year the CJHL Prospects Game has been held. For the first four years a single contest was staged. Then, during the next five years, a two-game series was held annually, the winning team being declared by the one who scored the most goals in the two outings.

During the past three years, however, the format returned to a simple one-match affair.

With this year’s triumph, Team West has now won seven out of the 12 contests.

About 1,700 fans attended the game at the Ed Lumley Arena, home to the Cornwall Colts of the Central Canada Hockey League.

Plenty of talent seekers also took in the action. More than 150 scouts, representing various NHL, Major Junior and Canadian and American universities, showed up to keep tabs on the participants.

Kale Howarth, a 19-year-old forward with the Trail Smoke Eaters, scored twice, including what proved to be the game-winning goal early in the third period.

Team West had more than double the shots (46-22) their opponents did on the night. But Nate McDonald from the Northern Ontario Junior Hockey League’s Powassan Voodoos and Anand Oberoi, a member of the CCHL’s Kanata Lasers, kept the match close for Team East.

The Team West goaltending chores were shared by Ty Taylor from the BCHL’s Vernon Vipers and Connor Dochuk, who toils for the Alberta Junior Hockey League’s Spruce Grove Saints.

Though they did not register any points on the evening, a pair of blueliners were selected as the players of the game.

Spruce Grove’s Ian Mitchell got the nod for Team West. And Matthew Kellenberger, from the OJHL’s Oakville Blades, was the Team East pick.