Team Canada Looking for Championship at 2017 World Junior A Challenge 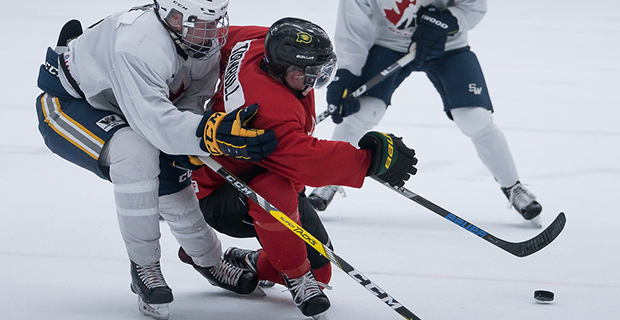 Carter Turnbull is playing in his third World Junior A Challenge and will be a leader both in the locker room and on the ice. Turnbull won a gold in 2015, but failed to get a medal with Team Canada West last year. (Chad Goddard/www.chadgoddard.ca)

In the 11-year history of the World Junior A Challenge (WJAC), Team Canada has four gold medals, with their last coming in 2015.

However, all four gold belong to the West, as the hockey-crazy host country gets two entries each year: Team Canada West and Team Canada East.

With the 12 WJAC kicking off on Sunday, Dec. 10 in Truro, N.S., both Canadian squads will be looking for gold, but Team East still needs their first.

In overall medal count, the West has eight – four golds, three silvers and a bronze. East has five silvers and one bronze for six total. For three of the wins by the West, they bested East in the final, giving them even more bragging rights over the cross-country counterparts.

On Dec. 5, Team Canada named the squads for the two teams vying for the medals in the six-team tournament. This year, the two Canucks lineups will battle the Czech Republic, Russia, Switzerland, and the United States.

TEAM CANADA WEST
Last year was a disappointment for the westcoasters as they failed to bring home any hardware. The team will have four players back again, including Carter Turnbull, playing in his third WJAC after capturing gold in 2015. Last year, Turnbull had four goals and eight points, good for a tie of third in tournament scoring.

Up front, one player to watch is Ross Armour from the Trail Smoke Eaters. He had been leading the British Columbia Hockey League (BCHL) in scoring up until he left for camp. Brett Stapley (Vernon), Ethan De Jong (Prince George), Brendan Budy (Langley) and Angus Crookshank (Langley) are all averaging more than a point-per-game in the BCHL, plus are NCAA D1 commits and will be looked upon to score.

Two 16-year-olds made the team: Harrison Blaisdell of the Chilliwack Chiefs (BCHL) and Dylan Holloway from the Okotoks Oilers (AJHL). Both are committed to big-time NCAA programs and are having strong debut years in Junior A. They should be locks to return next year as well.

On the backend, one of two Saskatchewan players, Levi Kleiboer, along with Penticton’s Jonny Tychonick are strong puck movers and offensively gifted, so they could be manning the point during the man advantage. Tychonick is also a highly-rated prospect for the upcoming NHL draft, so this tournament could improve his stock. Another Penticton blueliner, Ryan O’Connell, was a seventh round draft choice of the Toronto Maple Leafs last June.

Both tenders come from the BCHL and Mitch Adamyk and Zachary Rose will likely compete for starts as neither has the clear advantage. Adamyk is one year older and played 25 games with Powell River last season, while the younger Rose is in his debut Junior A season with Victoria. Their save percentages are nearly the same. Adamyk at .917 and Rose at .916.

TEAM CANADA EAST
After falling 4-0 in the final to the Americans last year, the East is out for redemption. Five players return with valuable experience learned in the defeat: Finn Evans, Aidan Girduckis, Logan Johnston, Jack McBain, Tim Theocharidis.

McBain is the leading scorer of all players on East and is expected to be drafted in the first round of the 2018 NHL Draft. McBain has 38 points in 31 games and is committed to Boston College next year. Colin Doyle, a three-year Ontario Junior Hockey League (OJHL) veteran, is on pace for his best year and has 35 points in 30 games.

Watch for forwards Anthony Romano, the eighth overall pick in last year’s OHL U18 Priority Draft and prospect for 2019 NHL draft, along with Nick Campoli, selected in the sixth round of last year’s NHL draft by the Vegas Golden Knights.

Scoring from the blueline could be a strength for the East – Theocharidis is the second-highest scoring D-man in the Central Canada Hockey League (CCHL) with eight goals and 32 points in 34 games. Matthew Kellenberger is another high-scoring defender, with 30 points in 32 games starring with Oakville of the OJHL.

Several players have Major Junior experience as well: Ben Evans (60 games with Ottawa in 2016-17), Logan Johnston (90 games with Sherbrooke and Moncton) and Francis Thibeault (88 games with Acadie-Bathurst and Moncton).

In net, stats would give Jett Alexander the edge as he is top five in save percentage and goals against average in the OJHL. The 6-4 goalie is in his third OJHL season and has been faring well. The other option is Noah Battaglia, who plays on a struggling Milton Icehawks team who have just one win in 30 games this season. Battaglia is top 10 in saves in the league and still have a save percentage above .900, so it will be interesting to see how he does on a team with lots of support.

There is only one other winner in the tournament’s history other than Team Canada West and it’s the Americans. Some can argue since Canada has two teams, they are splitting talent, but the USA are always strong. Only in the first year did they not pick up any hardware.

Each year, the WJAC is hosted by a Canadian city that is home to a Junior A squad. Entering its 12 year, the WJAC has hosted several top players, including last year’s fourth overall pick, Cale Makar, and this year’s potential top-three choice, Andrei Svechnikov. Play begins Dec. 10 and concludes with the final on Dec. 16.