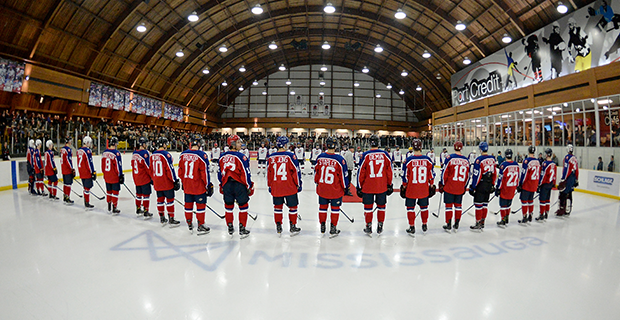 With 40 of the most skilled and talented players in the Canadian Junior Hockey League (CJHL), a top prospects game would normally be expected to be highlighted by flashy plays and dynamic goals.

Fans and scouts alike got to see those, but the physical element of the game was what stood at as Team West bested Team East 5-2.

With just under 14 minutes remaining in the third, Team West’s Austin Wong (Okotoks, AJHL) skated nearly the full length of the ice before blowing up an unsuspecting Matthew Kellenberger, leading to a scrum between the teams.

Jack McBain (Toronto, OJHL), the top ranked skater in the game, sought revenge immediately after the whistle and bulldozed Wong, resulting in an ejection for him. Wong avoided discipline and after scoring the would-be winner prior to the hit, he put the nail in the coffin late in the game enroute to being named West’s MVP.

Ethan Manderville, a big player with NHL bloodlines – his father Kent played more than 640 games – was the East MVP as he picked up a goal and threw his weight around.

Ahead of the tournament, Team West coach Joe Martin said he is there to motivate players and expects to see a high compete level.

“I know it’s an All-Star game and Prospects game, but they got to get rid of that mindset if they have it. You’ve got to go out there and show that you’re willing to win by how hard you work and how hard you compete, and all the guys on our roster have a great skillset. That will shine through, as long as the work ethic is there, and that’s what I’ll focus on,” Martin said.

The players in the CJHL Prospects Game were chosen by members of NHL Central Scouting and are among the top 40 CJHL prospects heading into the this spring’s draft in Dallas.

Martin, whose lineup was predetermined by scouts, also mentioned physicality would likely be an element his team will have, and Wong clearly listened.

These seventeen- and eighteen-year-olds are from as far west as Nanaimo, B.C. and far east in Bridgewater, Nova Scotia from 10 Junior A leagues. Just 13 of the 40 players are without NCAA commitments so far.

Corey Pronman, the senior prospects writer for The Athletic, made the trip up for the matchup and spoke to HockeyNow the morning prior to the game.

“It’s a good opportunity to see everybody at one time. I think different scouts have different philosophies, some find value in these games and I know some teams will not send anyone... I think there’s values in it to size a guy’s skating up, size a guy’s body up,” Pronman said.

Four players in the game rank inside ISS top 100 rankings: Team East’s McBain from the OJHL’s Toronto Jr. Canadians, Team West’s Jonathon Tychonick of Penticton, Stanislav Denim of Wenatchee in the BCHL, and Jacob Bernard-Docker of Okotoks in the AJHL.

McBain is ranked one spot ahead of Tychonick at 28. The Boston College commit has 49 points in 41 games.

Tychonick, the 12th overall selection by Saskatoon in the 2015 WHL Draft, plays with powerhouse Vees – he’ll patrol the blueline with the University of North Dakota next fall.

Just a few spots down at No. 40, Jacob Bernard-Docker has been a fast riser. Also at UND after this year, the d-man is a high-scorer with the AJHL-leading Oilers. The future Fighting Hawks teammates were paired together for the game.

Demin came in at no. 79 on the ISS rankings, and Pronman said his stock could rise.

“He’s had a really good season. I saw him play a few times this year, he’s a 6-1 defenceman who can skate, move the puck and has offensive ability.”

At press time, Demin had two more points than Tychonick to sit third in BCHL defenceman scoring race with a few more games played. The California native will play his college hockey at the University of Denver.

Scouts have seen a few of these players together before. Martin, who coached Team Canada West at the World Junior A Challenge, had eight from his time with the team in Truro, while Team East had seven members of Team Canada East.

Joining the head coaches behind the bench were former NHL All-Star Rick Vaive with Team East, and Leafs’ legend Wendel Clark with the West. The latter has now won the matchup eight times to East’s five.