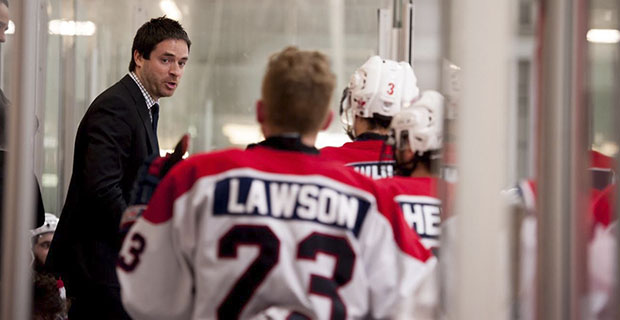 Plum coaching gigs continue to roll in for Martin Dagenais.

Dagenais, 35, is the head coach/general manager for the Ottawa Jr. Senators. And he also happens to be  the owner of the Central Canada Hockey League franchise.

Last month, Dagenais also served as an assistant coach for the Canada East squad that captured the silver medal at the World Junior A Challenge. That six-team international tournament was staged in Bonnyville, Alta.

Besides preparing the Jr. Senators for the stretch drive of the 2016-17 regular season, Dagenais now also has some additional responsibilities.

Last week it was announced he had been selected as the head coach for the Team East squad that will participate in the Canadian Junior Hockey League’s Prospects Game. That match, set for Jan. 25 in Cornwall, will feature 40 of the best Junior A players in the country that are eligible for the 2017 National Hockey League’s Entry Draft.

CJHL president Brent Ladds gave Dagenais an early gift, phoning him a couple of days before Christmas to offer the Team East job.

While coaches get judged on their performances sometimes as much as players do, Dagenais does not believe such will be the case at the CJHL Prospects Game.

The match is expected to attract a plethora of scouts from pro, Major Junior and collegiate teams. And Dagenais anticipates eyes will be focused on on-ice efforts from the players who are looking to move up to higher levels, and not so much on him.

“But I want to be professional about it and try to win the game,” he said.

Dagenais himself would also like to coach at a higher level. But he’s just not sure when that might be.

Though the Jr. Senators have been one of the CCHL’s better squads in recent seasons, Dagenais has not led them to a league title.

“I’m not where I want to be right now,” he said. “But I want to accomplish more before I would think of moving on. I’d like to be able to win a championship. Or maybe two.”

Also to be taken into serious consideration is the fact Dagenais also has another job. He’s been a teacher for the past 12 years.

As the Jr. Senators’ record in recent years suggest, Dagenais obviously knows a thing or two about coaching. Several others are taking note.

And it might just be a matter of time before Dagenais gets the call to a higher level.