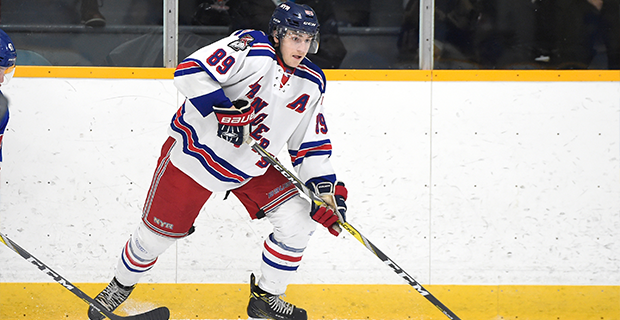 This past week it was announced that Campoli is this year’s recipient of the Ontario Junior Hockey League’s Top Prospect Award.

This accolade is presented to the individual expected to be the first player from the league chosen in the annual NHL Entry Draft. This year’s pro draft is scheduled for June 23-24 in Chicago.

“It’s a great achievement,” Campoli said of his award. “It comes out of hard work. What you put in is what you get out.”

Scouts continue to think rather highly of the 18-year-old even though he played less than 40 per cent of the Rangers’ regular season games.
Campoli’s season actually didn’t commence until late November as he was recovering from a mid-September ankle surgery.

As a result, he only appeared in 20 of the Rangers’ 54 regular season games. Yet he still managed to finish in a tie for fifth place in team scoring with 32 points.

With his 1.6 points-per-game average, Campoli easily would have been the club’s runaway scoring leader had he played the entire season.

The fact Campoli managed to play as well as he did is even more remarkable considering he admits he was at best only 80 per cent healthy throughout the season.

His ankle’s range of mobility was never where he wanted it to be. He hasn’t been on the ice since Mar. 10, when the Rangers played their last playoff game.

The North York squad was downed 4-1 by the Oakville Blades in its best-of-seven, opening-round playoff series.

Campoli is continuing therapy on his ankle now.

Campoli anticipates it will be another two weeks before he’s able to start training again, in preparation of the 2017-18 campaign.

Though he would still be eligible to return to the junior ranks, Campoli will be headed to the state of New York to begin his NCAA career with the Clarkson Golden Knights.

After sifting through a couple of dozen Division 1 offers, Campoli settled on Clarkson this past November.

“I felt like it was right,” said Campoli, who plans on studying Business at Clarkson. “I felt like the coaches had a lot of interest in me.”

Pro scouts continue to feel that way about the 5-foot-11, 185-pounder.

How highly others think of Campoli is evidenced by the fact he was invited to the Team Canada East training camp this past December even though he had only appeared in two games with the Rangers at that point.

Campoli’s lack of game action, though, no doubt hindered his chances of making the club, which competed at the World Junior A Challenge in Bonnyville, Alta.

Campoli, however, did participate in the Canadian Junior Hockey League’s Prospects Game, which was held in Cornwall in January. That game featured 40 CJHL players eligible for this year’s NHL draft.