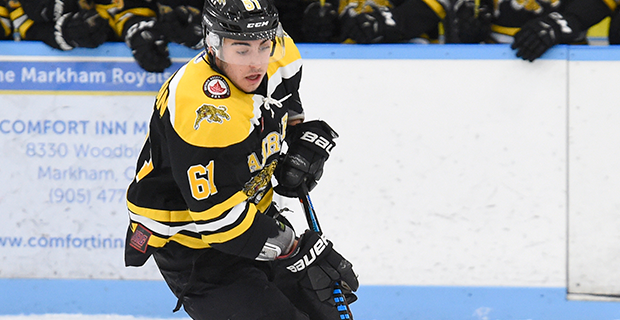 Mel Melconian, one of the few bright spots for the Aurora Tigers this season, was chosen as the OJHL's rookie of the year. (Andy Corneau/OJHL Images)

Tigers Rookie Excels
The Aurora Tigers don’t have many highlights to look back on this season.

The Tigers won just nine of their 54 regular season games and finished a distant 26 points out of a playoff spot.

But the Aurora franchise did receive some positive postseason news. Tigers forward Mel Melconian was chosen as the OJHL’s rookie of the year.

Despite being a newcomer to the league, Melconian, who turned 18 last October, led the Aurora club in goals (29), assists (30) and points (59) while appearing in 51 games.

As it turns out, this was Melconian’s one and only season with the Tigers. That’s because earlier this year, he accepted a scholarship offer from Connecticut’s Sacred Heart University Pioneers, beginning with the 2017-18 season.

Melconian, who led all OJHL rookies in scoring, also participated in a pair of other prestigious events during the season.

He was a member of the Team East squad that competed in the Canadian Junior Hockey League’s Prospects Game staged in Cornwall in late January. That match featured 40 Junior A players who are eligible for the National Hockey League’s Entry Draft this year.

Melconian was also on one of the four OJHL squads that competed in the Eastern Canada Cup All-Star Challenge. That event, which was also in Cornwall, was staged last November.

Lapid, 19, was chosen as the OJHL’s Scholastic Player of the Year.

Besides maintaining an A average in his Kinesiology and Mathematics courses at Toronto’s York University, Lapid also earned 30 points in 51 games with the Patriots this season.

Cicchillo can only go in one direction with the Milton franchise. Up.

The Icehawks finished dead last in the overall standings of the 22-team OJHL this season. Milton managed to win just four out of its 54 regular season matches.

For Cicchillo, this will actually mark his second go-around as the Icehawks’ head coach, having served in that position for a year more than a decade ago.

Cicchillo also brings with him six seasons of coaching experience from the Ontario Hockey League, four years as an assistant with the then-Mississauga IceDogs and two seasons as head coach of the Niagara IceDogs.

Cicchillo spent the past year as the head coach of the OJHL’s Toronto Patriots.