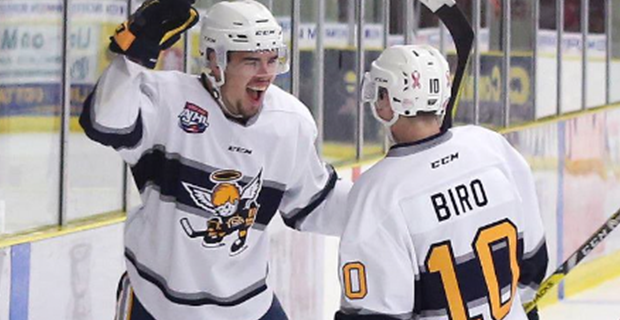 Chris Van Os-Shaw of the Spruce Grove Saints is one of four AJHL MVP nominees. The  20-year-old has a big lead in both goals and points overall and is powering his team to the No. 1 spot in the North Division. (AJHL/Twitter)

With the Alberta Junior Hockey League (AJHL) wrapping up, the Most Valuable Player nominees have been announced and feature a number of high-scoring players.

Forward Justin Bernier (Grand Prairie), Jordan Taupert (Drumheller) and Chris Van Os-Shaw (Spruce Grove), along with defenceman Dennis Cesana (Brooks) each present strong cases as why they are deserving of the hardware.

As of Feb. 25, Bernier was tied for No. 2 in league scoring with 74 points. He’s been a threat on both the powerplay and penalty kill and a big addition to the storm in his first AJHL year.

It’s been a strong effort from the ’97s on the Storm. Along with Bernier, Edouard Michaud (36 goals, 69 points) and Dallas Comeau (45 assists, 65 points) have propelled the team to potential first-round home ice advantage.

Last year, Bernier played in the Quebec Major Junior Hockey League (QMJHL) with the Shawinigan Cataractes and recorded 32 points in 61 games. He appeared in the playoffs for two seasons with the Cataractes and should up his game in the postseason with the Storm.

Dennis Cesana, Brooks Bandits
After the year Cale Makar had last season with Brooks, it’d be tough for any defenceman to live up to that.

However, second-year Bandit Dennis Cesana has been astounding – he’s first in the AJHL in assists and tied for fourth in scoring for all players, let alone defenders. With 13 goals and 56 assists, Cesana is also the leading scorer on his team.

Cesana set the franchise record for assists as a blueliner, surpassing the previously mentioned Makar. He’s one assist away from breaking into the top 10 all-time for most assists by a defender in a season (source: eliteprospects.com). Last year was a strong year for Cesana as well as he had 12 goals and 40 assists, but he’s made a big jump as the No. 1 defender and team captain.

The Michigan State commit leads Brooks into the playoffs as the South’s No. 2 seed and will hope to lead the team to the strong finishes the team has come accustomed to. With consecutive AJHL championships and as defending Western Canada Cup Champions, the Bandits aren’t as dominant as last year, but will still likely get a long run.

He’s got one hat trick and one five-point game this season to sit at 29 goals and 69 points. He’s first on the Dragons in goals, assists and powerplay points. Drafted into both the USHL and WHL, Taupert is hitting his full potential in the AJHL.

After spending his first two years with the Drayton Valley Thunder, Taupert made the move to Drumheller last season and had a breakout campaign, scoring 20 goals and 31 assists. The 19-year-old should be a favourite for the scoring title next season as he enters his final year of Junior A eligibility and is still looking for a college commitment.

Chris Van Os-Shaw, Spruce Grove Saints
The league leader in both points and goals has been a big reason why Spruce Grove is atop the North Division. Van Os-Shaw has 48 goals and 42 assists through Feb. 25 and is 16 points up on the next closest scorer.

In his first year in the AJHL, the Regina native has blossomed into a star. He has three hat tricks and 12 games with at least three points. Spruce Grove have the second best record in the league, but have relied heavily on Van Os-Shaw for offence – he has yet to miss a game and is 31 points head in scoring on his next teammate.

With a point-per-game average of 1.6, Van Os-Shaw is projected to get five more points (unless he is rested), which would bring him to 95 on the year. He’s just behind the pace set by Canmore’s Matt Forchuk last year, who had 97 points.

Van Os-Shaw spent two years in the Saskatchewan Junior Hockey League (SJHL), recording 32 points in 40 games split between Weyburn and Humboldt. Year two was a breakout for him as he scored 36 goals and 68 points, ranking seventh in league scoring.

Next year, Van Os-Shaw will head to the University of Alaska – Anchorage, but that’s after the Saints go deep in the playoffs, which is safe to assume. Aside from last year, Spruce Grove has been in the North Final every year from 2009-2016, including six of seven finals.

The MVP winner, along with other winners, will be announced during the final week of the AJHL season, ending March 4.