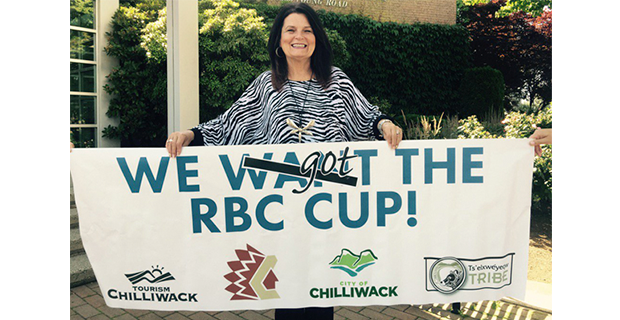 Chilliwack Mayor Sharon Gaetz proudly holds a banner indicating her city was awarded the hosting rights for the 2018 RBC Cup tournament. (Courtesy of the Chilliwack Chiefs)

The Chilliwack Chiefs have had their share of recent successes advancing to the British Columbia Hockey League (BCHL) finals in each of the past two years.

The Chiefs are also guaranteed to have a lengthy 2017-18 campaign.

That’s because regardless of how the Chilliwack franchise fares in its regular season and playoff action, the squad will still be playing next May.

As hosts, the Chiefs are guaranteed a berth in the five-team national RBC Cup tournament which will be staged at the Prospera Centre from May 12 to 20, 2018.

Jason Tatarnic, who is heading into his fourth season as the Chiefs’ head coach/GM, said it’s a good feeling being the only squad in the entire Canadian Junior Hockey League that has secured an appearance at the 2018 national tourney.

“It’s nice to know that,” he said. “But we’re not going to put any added pressure on our guys. Our mindset is just going to be to keep developing throughout the year and be ready for the RBC Cup.”

The Chiefs, who kick off their BCHL regular season schedule on Sept. 8, are expected to have just five returnees (three forwards and two defencemen) on their roster this season.

“Our turnover is pretty high every year,” Tatarnic said. “We usually lose 10 to 15 kids to scholarships.”

Tatarnic, however, is confident his squad will once again be near the top of the league standings this coming season.

“We like our recruits,” he said. “We’re really happy with all of them.”

One of the newcomers is 18-year-old forward Skyler Brind’Amour, whose father Rod is a former NHL star and currently an assistant coach with the Carolina Hurricanes.

The younger Brind’Amour was selected in the sixth round of the NHL Entry Draft this past June by the Edmonton Oilers. He’s also committed to attend Michigan State but not until the 2019-20 season.

Meanwhile, it’s not only the Chiefs’ organization that is preparing for the national tournament. Those who were presenting partners for the bid include officials from the City of Chilliwack, Chilliwack Tourism and the Ts’elxwéyeqw Tribe.

Barry Douglas, the Chiefs’ director of marketing and sales, is one of the key figures on the 2018 RBC Cup organizing committee. He said quite a bit of interest for next May’s event has already been generated.

Chiefs’ season ticket holders have already scooped up about 500 ticket packages. Other members of the public will also soon be able to buy their packages.

“Our goal is to break the all-time RBC Cup attendance record,” Douglas said. “We’ll need to average 2,800 tickets (per game) to get the record.”

Helping to spread the word are six volunteers who are part of the RBC Cup Street Team launched in June. These volunteers have been and will continue to be rather visible at numerous events in the city.

Douglas added there was no shortage of others looking to help out as well.

“We’ll need about 150 people to help out with our game day operations,” he said.

It was announced back in June of 2016 that Chilliwack had been awarded the 2018 RBC Cup. Shortly afterwards, more than enough people indicated they would be willing to serve as volunteers.

“But we are taking some new applications still,” Douglas said.

While the Chiefs will make their first appearance at the RBC Cup tournament next year, Tatarnic will have an inkling of what to expect.

He was the bench boss of the New Brunswick-based Woodstock Slammers, members of the Maritime Hockey League, who competed at the 2012 RBC Cup in Humboldt, Sask.