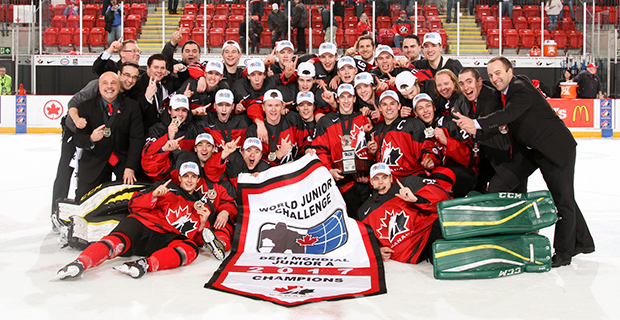 Team Canada West won their fifth gold medal at the World Junior A Challenge in Truro, N.S. with a 5-1 win over the Americans in the final. Despite a winless round robin, West found their form en route to their championship. (Dennis Pajot/Hockey Canada)

In the 12-year history of the World Junior A Challenge (WJAC), Team Canada West and Team USA are the only teams to win the championship. The two have faced off in the final three times, and the US has won each time. However, the fourth meeting had a different result as Canada West won 5-1 in the final to earn their fifth gold at the WJAC in Truro, N.S.

In the championship game, Canada’s Zach Rose turned aside 35 of 36 shots while his teammates converted on key chances, potting five on 19 shots in the final. Angus Crookshank had the game-winning goal and an assist.

Rick Swan, an assistant coach for Team Canada West, said the 0-2 start wasn’t a huge obstacle for the team. In 2008, West also lost their first two before getting three straight wins en route to gold.

“We used that incentive as part of our theme as positive expectancy that we’ve got to believe in ourselves,” Swan said. “It has been done, it can be done. It’s a great script and we can be the second team in tournament history to do so.”

Positive expectancy was the choice ideology for Canada West, according to Swan. After the opening two losses, the coaching staff looked to turn things around.

“We decided to roll up our sleeves and make our major focus on team building versus the Xs and Os and tactics. We spent a good day on team-building exercises and and really giving guys an opportunity to get some trust with each other by getting to know them a little better,” Swan said.

Earlier in the tournament, West fell to the US 2-1 in round robin play, staying winless and setting up a tough road to the finals. First, it was an all-Canadian matchup in one of the quarterfinals, as East faced West in a winner-moves-on contest.

Swan said he had belief in the players from the get go, and even still after the poor start.

“As a staff, we knew we were way deeper than the year previously, so it was easy to focus on what’s going well. It was hard to make sure we were really dialling in on what our potential was and as well look at the positive expectancies we had. We knew that the team was way too good to go 0-3 and to be playing in a fifth/sixth game,” Swan said.

With under seven minutes remaining, East held a one-goal lead and things looked dire. However, Ross Armour stole the show and saved the tournament as he scored the game-tying goal and overtime winner to lift Canada West to the semis.

On the other side, the Americans also had a quarterfinal matchup and they defeated Switzerland 3-1, nearly doubling their opponents in shots.

Both Russia and the Czech Republic earning byes thanks to 2-0 records. The Czechs beat the eventual finalists in both round robin games, besting Canada West 5-2 before disposing of the Americans 4-2.

Meanwhile, thanks to a big 5-1 opening win over Canada East, Russia was set up nicely thanks to goal differential being the first tie-breaker for winning the group. East won their game against Switzerland, and with the Swiss needing a win to push the standings into a three-way tie, they gambled for a win over the Russians.

Tied 2-2 with minutes remaining in the third, Switzerland pulled their goalie in hopes of scoring the go-ahead tally, but Russia iced the game with a goal from inside their own blueline into the empty cage for the win.

In the semis, Russia and USA seemed to go opposite ways from the start of the tournament. The US held a 2-0 lead through two periods before sealing it in the final 10 minutes of the game, scoring three goals in less than eight minutes, winning 5-0.

Despite their impressive start that gave the Czechs a rest day and bye to the semifinals, it seems the time off took the wind out of their sails. Against Canada West, the game was tied at one with just over 10 minutes in the third, but West scored four unanswered goals, pushing them to the finals.

Having already seen the Czechs and Americans in round robin, Swan said it helped West for the game plan.

“I felt that as a coaching staff we put in the extra work,” Swan said. “We rolled up our sleeves and put on our work boots that was contagious for our players, knowing that their coaching staff was going to do everything they can to make sure we’re well prepared. The video sessions were extensive, but obviously it allowed us to have a good game plan against those guys.”

Canada West’s goalie Rose was stellar all tournament long and was rewarded as the tournament MVP (and all-star) after posting 3-1 record along with a 1.59 GAA and .942 save percentage. West’s Armour was one of the tournament all-stars after tying for the tournament lead in points (six) and goals (four), including a few game winners. East’s Colton Kalezic and USA’s Tyler were the other forwards named all-stars.

On the point, Alexander Romanov of Russia tied Armour with four goals for most in the tournament and was given an all-star nod, as was West’s Jonny Tychonick, a high-level prospect for the upcoming NHL Draft.

The location of next year’s tournament is still up in the air, but it will stick in a Canadian city that’s home to a Junior A team, as is tradition.