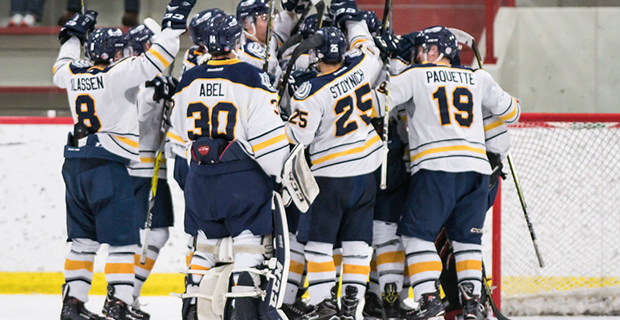 The Calgary Mustangs are getting to celebrate wins a lot more this year and have 15 wins to date, just five fewer than the team managed in the previous two years combined. (Chad Goddard/www.chadgoddard.ca)

In recent years, if you were to check the standings of the Alberta Junior Hockey League (AJHL), the Calgary Mustangs would be sitting at or close to the bottom of the standings, especially in the South Division.

However, after a number of seasons of futility, Calgary’s long-suffering squad has shown massive improvement this year. The team is 15-15-2 (as of Dec. 8) and sit fourth in the Viterra South Division near the midpoint of the season.

There were also a few games where the Mustangs didn’t have 18 skaters on the ice and were left with a short bench.

What’s different? Head coach and general manager Tyler Drader, who joined the team in December of last year, revamped the team in the offseason and capitalized on players squeezed out of other AJHL squads to offer them a spot.

“With the organization, we’ve changed a lot of things,” Drader said. “We’ve got a new president, some new board members, new fresh ideas and I’ve brought in a couple of good coaches that I think have helped. Basically we’ve got a bunch of players that other teams overlooked.”

There’s been low attendance and a poor record over the years, and Drader admitted recruiting was tough this offseason, but the team claimed players cut from other Junior A camps and it’s been a successful recipe for a stronger team.

“Nobody wanted to come here unless it was the last spot. I got told ‘no’ a lot... a lot, so it was certainly hard to recruit but I kept plugging away and we ended up getting some quality players,” Drader said.

Quality players indeed, like Joseph Karpyshyn, a local kid who bounced around the AJHL and Kootenay International Junior Hockey League (KIJHL), a Junior B circuit, before finding success this year, leading Calgary in scoring this year. Chase Miller, a 19-year-old ‘rookie’ new to the league, has 10 goals and 22 points through 32 games after leading the KIJHL’s Kimberley Dynamiters in scoring last year.

Goaltending was a spot the Mustangs needed to strengthen, and the additions of Ashton Abel, a rookie from Grand Prairie, along with Joel May, acquired from Camrose at the end of September have paid off. Drader said he was looking for younger goalies to have a strong foundation for the team next year, so getting more experience under their belts should help Abel and May.

On the back end, 20-year-old Salvatore Scalise had provided steady leadership with the ‘C’ on his chest and is one pace for his best offensive season to date. Ayden Roche-Setoguchi, acquired in an offseason trade, has built off a strong rookie year to be a top pairing guy for the team.

A big move Drader has made is the focus on next year’s team, without giving up too much talent for the still-competitive Mustangs of 2017-18. He has made several trades of talented players and 20-year-olds in order to improve the youth on the roster.

However, these trades don’t always work out. Drader sent Jordan Xavier and Kylor Wall to the Okotoks Oilers in separate trades in the past year, and despite two of Calgary’s best players heading South, the return wasn’t what was expected. That’s not because Drader didn’t ask for good compensation, but because two of the players wouldn’t report. That led to sending their rights for other players.

The Mustangs look poised to fight for the third or fourth spot in the South Division, which would give them home ice advantage in the first round – that last occurred in 2011-12.

Success is one of the best ways the Mustangs can sell recruits. Although their attendance is at the bottom, along with the other team sharing the city, the Canucks, the facilities are strong and there is certainly more to offer players for recreation in a large city.

“Now players see that we can be competitive so hopefully we can land some of those guys,” Drader said.

With a new team style and different attitude surrounding the team, the Mustangs are headed for an upswing.

“From what people tell me, the change in culture has been good,” Drader said. “For a team that plays fast and moves the puck, players want to come here now.”