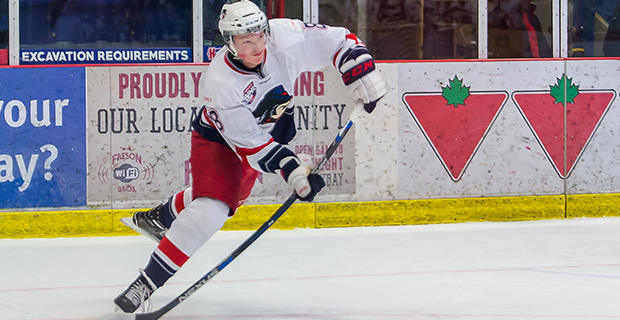 Cale Makar, a defenceman with the Alberta Junior Hockey League's Brooks Bandits, is expected to be a first-round pick at the National Hockey League's Entry Draft this June. (Emily Duncan / Em Rose Photography)

All indications are Canadian Junior Hockey League officials will once again be all smiles early during the National Hockey League’s Entry Draft this year.

During the 2016 draft, staged in Buffalo, three CJHL players were selected in the opening round.

Tyson Jost and Dante Fabbro, who were teammates with the British Columbia Hockey League’s Penticton Vees (and reunited on the world stage at this year’s World Juniors), were selected 10th and 17th, respectively, by the Colorado Avalanche and Nashville Predators.

And another BCHL player, Dennis Cholowski of the Chilliwack Chiefs, was taken 20th overall by the Detroit Red Wings.

As for this year’s draft, which will be held in June in Chicago, defenceman Cale Makar of the Alberta Junior Hockey League’s Brooks Bandits, is expected to be an early first round selection.

In fact, Makar’s draft stock has been rising so rapidly this season, many are predicting he’ll be chosen in the first half of the opening round.
“At the end of the day it doesn’t matter where you go,” said Makar, who is a few hairs under six feet and weighs 180 pounds. “I think it just matters what you do afterwards.”

It’s easy to see why Makar’s stock is on the upswing. Besides starring for the Bandits, he also turned heads with his play while serving as the captain of the Team West squad at the World Junior A Challenge, which was held last month in Bonnyville, Alta.

Makar entered the current campaign hoping to play well enough to become a first round pick.

“It was a goal of mine coming into the season,” he said. “I picked up an advisor in the summer. I asked him if he thought it was possible to get drafted in the first round and he said yes.”

Regardless of where he does get drafted, Makar will be heading to the NCAA ranks this coming season. He’ll be joining the University of Massachusetts Amherst Minutemen.

Makar, however, is not expecting to utilize his four years of college eligibility as he is keen to commence a pro career.

“I think my plan is to play two years in college and then go to the next level,” he said.

Bandits head coach/GM Ryan Papaioannou believes how long Makar spends in the NCAA depends on which NHL organization drafts him and how much he progresses.

“He’s a quick learner,” Papaioannou said. “But he could very well be ready to go to the next level in two years. But he might be ready in one year or in three years.”

Though Makar is earning rave reviews with his play now, Papaioannou believes his star blueliner has room for improvement.

“Offensively he’s so very dynamic,” he said. “But like any young defender, he needs to work on the details of defence.”

While many are predicting Makar will go on to become an NHL player, Papaioannou said it is difficult for him to compare him to any current NHL defencemen.

“I don’t watch enough pro hockey,” he said. “We spend enough time watching teams in our own league. But I know (respected broadcast analyst) Craig Button has said he’s like an Erik Karlsson (Ottawa Senators captain) type of player. If that’s the comparison he’s making, then that’s pretty good.”