Americans favourites Once Again at World Jr. A Challenge 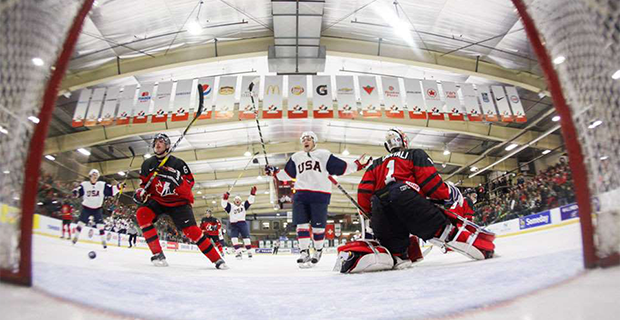 With seven gold medals in 11 years, the Americans are almost always the favourites at the World Junior A Challenge. This year, the team has four draft picks from the 2017 NHL Draft leading the way. (Courtesy of Hockey Canada)

Outside of Team Canada East and West, the four international entries for the World Junior A Challenge (WJAC) are bringing formidable teams.

The Americans are normally the favourites, having won last year and seven of 11 total. Russia has the third most medals (tied with Canada East), Switzerland has the fifth most and the Czechs are yet to pick up any hardware.

Last year, it was the same six teams and five countries that played for the glory. Here’s who could standout for each team.

CZECH REPUBLIC
It hasn’t been an easy time for the Czech Republic at the World Junior A Challenge. The team has made five appearances over the years. They joined the tournament in 2011 and have been there each year except 2014.

Last year, they were able to knock off the eventual champion Americans 1-0, plus Canada West 4-3 in a shootout in the quarterfinal, marking their most successful year yet. However, they fell to the Russians in the bronze medal game.

One advantage the Czech players have over other nations is the fact that their top 17-, 18- and 19-year-olds can get experience playing in the country’s top league against grown men.

There are some talented players for the Czechs. Petr Eret has 31 points in 20 games, ranking third in the country’s U20 league playing for HC Plzen. Jaroslav Dvorak has played 15 games across two seasons in the Czech League and 25 with the Czech’s second tier. Lukas Rousek has 13 games with HC Sparta this year, playing alongside former NHLer Zbynek Michalek. Rousek also led the Czech U18 league in goals and points last campaign with 82 points in 40 games.

After extensive experience in the Czech Republic in several leagues, plus internationally, Jan Hladonik made the move to the Quebec Major Junior Hockey League (QMJHL) with Blainville-Boisbriand. He’s played with the Czech National team from U16 to U19.

One of the biggest players to watch is imposing figure Jachym Kondelik. The 6-6 hulking centre has played two seasons in the United States Hockey League (USHL) and is ranked 47th on Future Consideration’s draft rankings for 2018.

In the crease, Adam Brizgala heads north from Muskegon of the USHL, as opposed to west from Europe like most of his teammates. Brizgala has spent two years in the US tending the twine. Milan Kloucek has split his season between the top Czech League and the second level. Surprisingly, his numbers are better in the top ranks, sporting a 2.25 GAA and .925 save percentage. Both have represented the Czechs internationally since U16 tournaments so they are familiar with the competition between one another.

RUSSIA
Team Russia always sends a younger team than the others. Every player on the roster is born in 2000, while teams like Canada and the U.S. have rosters a players who are mostly a year or two older.

Alexander Zhabreyev is a centre for MHK Dynamo St. Petersburg in the MHL, the major junior league in Eurasia. He’s got 25 points in 31 games, the best mark for all players on this team, plus he is rated by eliteprospects.com as a top prospect for the upcoming draft. He’s not the only standout player. Grigori Denisenko could go in the first round and is No. 18 on the latest ISS rankings. Vladislav Kotkov and Dmitri Zavgorodny, both scoring well as rookies in the QMJHL are ranked 31 and 35, respectively, by Future Considerations.

Nikita Rtishchev (61), Danila Galenyuk (71) and Rusland Ishakov (92), are also ranked in Future Consideration’s top 100. Add in Nikita Okhotyuk, who just turned 17 on Dec. 4 and is a top prospect for 2019 currently playing in the OHL and scouts will be watching the Russians closely.

They also look set in net, as Daniil Isayev has played 13 MHL games with Loko Yaroslavl and has a sparkling 1.30 GAA and .944 save percentage. Amir Miftakhov also has impressive numbers, registering a 2.08 GAA and .923 save percentage with Irbis Kazan. Both could be drafted this year. The third goalie, Mikhail Isayev has lesser stars but also plays on a struggling Ladia squad.

Russia has collected six medals overall, two silvers and four bronze. In 2015, they lost in the final to Team Canada West.

SWITZERLAND
Back in 2012, Switzerland got their second and at the WJAC, a bronze to add to the other they won in 2010. However, in the last two tournaments, the team has failed to record a win.

They come back with a talented team and several players who have experience in the country’s highest league, the NLA.

Kyen Sopa should be a leader in the scoring for the team, judging by his 26 points in 17 games with Bern U20, ranking sixth in league scoring. As captain of the Davos U20 team an averaging a point per game, Ramon Tanner brings international experience for the Swiss. He’s joined up front by Jeremi Gerber, averaging more than a point-per-game this season, plus Keijo Weinel, who has 19 points in 17 games of U20 play and was recently promoted to the NLA.

On defence, the Swiss have some players that stand out. Luca Matewa has appeared in four NLA games, 10 NLB games and while in the U20 to start the year, had 13 points in 15 games. David Aebischer, no relation to the former NHL goalie, has 14 points in 16 U20 games, and Loic Vouardoux was last playing in the NLA before getting the call for the WJAC.

Goaltending should be a strength for Switzerland. They had Akira Schmid, a listed prospect for the 2018 NHL Draft who has a 2.52 GAA in the Swiss Elite Junior A League. Then, Luca Hollenstein, who has a 1.89 GAA in the Elite Jr. A league, has also appeared in a NLB game prior to the tournament.

UNITED STATES
Going off NHL draftees and the Americans would be the favourite, considering they have four picks from the 2017 Draft. Plus, they won last year and have won gold in seven of 11 tournaments. The team they bring is always very impressive.

Looking at the picks, Clayton Phillips (third round, Pittsburgh), Jonathan Dugan (fifth round, Vegas), Cole Guttman (sixth round, Tampa), and Nicklaus Perbix (sixth round, Tampa) are all very talented players. Phillips and Perbix are defencemen while Guttman and Dugan play up front. Dugan has the highest point-per-game average in the USHL for non-US Development team players at 1.41.

Blake McLaughlin, a potential second or third round draft pick this spring, is fifth in USHL scoring. Defenceman Graham Lillibridge has 18 points in 17 games and should be seeing powerplay time.

In net, the Americans will turn to Ryan Bischel and Jake Kucharski. Both are 99-born and starters in the USHL. Bischel has better stats, recording a 2.59 GAA and .905 save percentage, while Kucharski has the size advantage, standing 6-4. Bischel’s club, the Fargo Force, have 15 more points than Kucharski’s Des Moines Buccaneers.

Each member of the US team is playing in the USHL this year and all have NCAA Division 1 commitments.