2018 RBC Cup Kicks Off in Chilliwack 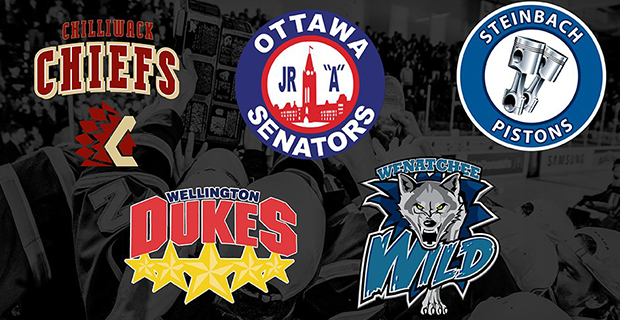 The 23rd RBC Cup kicks off with five teams all looking for their first National Junior A title in team history.

Hosted by the British Columbia Hockey League’s (BCHL) Chilliwack Chiefs, the RBC Cup brings in four other teams from across the country, and in this year’s case, one American team for the second time.

After a series of regional play-ins, the fields were set after the first weekend in May. We look at the five teams participating and what they bring to the table.

The host Chilliwack Chiefs will be well rested when play begins on May 11. They lost in round one of the British Columbia Hockey League (BCHL) to Prince George, with their last game played two months prior on March 11. The Chiefs were able to push the series to seven against the Spruce Kings, who finished 16 points ahead of Chilliwack, but couldn’t take the series.

Will Calverley led the team in scoring with 46 points in 55 games and tied for first on the team in goals with Tommy Lee. In the first round of the playoffs, defender Bryan Allbee had six points in seven games to lead the team.

Goaltending could be a bit of an issue for the Chiefs as they have two youngers goalies on the squad. Starter Daniel Chenard bounced back from a regular season where he had a sub .900 save percentage to record a .927 in the first round of the playoffs.

Just one week ahead of the RBC Cup, the Chiefs made a surprising move to replace head coach Jason Tatarnic with assistant coach Brian Maloney. They also hired Cam Keith, who was relieved of his head coaching position with the Trail Smoke Eaters last month.

The Chiefs seemed like a logical pick as host after back-to-back final appearances in the BCHL and nearly making the RBC Cup last year, but now they’ll head in as the underdog. This is the third time and first since 2002 the Chiefs are playing at the Junior A Nationals.

The ANAVET Cup was an emotional one, with the SJHL Champion Nipawin Hawks facing Steinbach. Just last month, the Hawks were waiting for their third round matchup with the Humboldt Broncos when the team bus crashed and the news shook the world. With many Nipawin players close to the Broncos, they dedicated the rest of their season to Humboldt after the tragedy, and while they were able to win the league, the Pistons stopped them in the regional finals.

Steinbach won the series 4-2 and will be making their first RBC Cup appearance. The Pistons should be considered a threat following a year that saw them second in the country in goal differential and a 100-point season.

Brad Schoonbaert, the MJHL’s second leading scorer who had 91 points in 59 games, will be one of the most exciting players to watch. They’ve got depth in scoring, with six players who found twine at least 24 times. Blueliner Darby Gula had 61 points in 56 games and provides plenty of offence from the backend.

In net, the Pistons have a top-ranked NHL prospect between the pipes in Matthew Thiessen. The 17-year-old worked his way into the starting roll and was very impressive in the MJHL playoffs, sporting a 1.60 GAA and .943 save percentage.

With a few close games at the Fred Page Cup, the Ottawa Jr. Senators rode a perfect 3-0 record into the final, looking for a big performance to get to the RBC Cup. They got just that, defeating Longueuil 10-1.

In the CCHL Finals, Ottawa met the first-place Carleton Place Canadians and ended the matchup in five games, despite every game ending with just a one-goal difference. The Canadians had their four-year reign atop the league end. Prior to this series, the Senators needed seven games against Pembroke in the second round and six against Brockville in the third. Ottawa will make their second appearance at the RBC Cup.

In the regular season, Chiwetin Blacksmith led the team in scoring with 67 points in 59 games. Meanwhile, Nick Lalonde had the highest points-per-game on the Sens and third highest in the CCHL before leading playoff scorers with 23 points in 19 games. Lalonde was one of three 30-goal scorers as well.

In net, Connor Hicks posted the league’s third-best GAA and second-best save percentage before going undefeated in the Fred Page Cup. Should he falter, Francis Boisvert is more than capable as a backup and will likely take the net over next year when Hicks heads to Dalhousie University.

If perseverance is a quality to look for in an RBC Cup team, the Wellington Dukes may be the leaders in that category following the season they had. After finishing fifth in the OJHL, the Dukes went to seven games in the first round, were down 3-1 in the second round before coming back to again win in seven, and then won their next two rounds 4-1 and 4-2.

In the Dudley Hewitt Cup, Wellington won the Central bid for the RBC Cup after three-goal wins in both the semi-final and the final. They rebounded after an initial round robin loss as well.

Head coach John Druce, who guided the host Cobourg Cougars to a RBC Cup last year, is now the bench boss in Wellington and is appearing at his second-consecutive National Championship. He took over for the team midway through the year.

Mitchell Martan is one player to watch for the Dukes - the 19-year-old had 67 points in 51 games, plus four points in the Dudley Hewitt Cup. Ted McGeen, who had 34 goals in the regular season, and Colin Doyle, who led the Dukes in playoff scoring, are another pair of offensive threats.

Starter Jonah Capriotti turned in a sold save percentage in both the regular season and playoffs, and will likely get the bulk of the starts at the RBC Cup. The Dukes are appearing in their third National Championship.

Located between Seattle and Spokane, Wenatchee is looking to become the first American team to win the RBC Cup after claiming the BCHL Championship as well as the Doyle Cup. The Minnesota Wilderness played in 2013 but came away on the losing side.

Wenatchee beat the AJHL Champion Spruce Grove Saints 4-1 to earn a trip up north to Chilliwack. In the BCHL playoffs, the Wild had just one series go beyond five games, defeating Prince George in the final.

University of North Dakota commit Jasper Weatherby led the BCHL in scoring in the regular season, but hit a new level in the playoffs, torching the league for 38 points in 20 games, 10 more than the next closest player, teammate AJ Vanderbeck. Defenceman Cooper Zech is an assist machine and huge asset when quarterbacking the powerplay.

Another player to watch is defender Slava Demin, who could be a second round choice in June’s NHL Draft.

The offence may need to carry the team as goaltending doesn’t appear to be a strong suit. Austin Park’s numbers don’t jump off the page from the regular season and playoffs, but he did have a solid five games in the Doyle Cup.

Teams from British Columbia have the most RBC Cup wins, totalling 13. Ontario is close behind at 11, while Saskatchewan’s 10 are third.