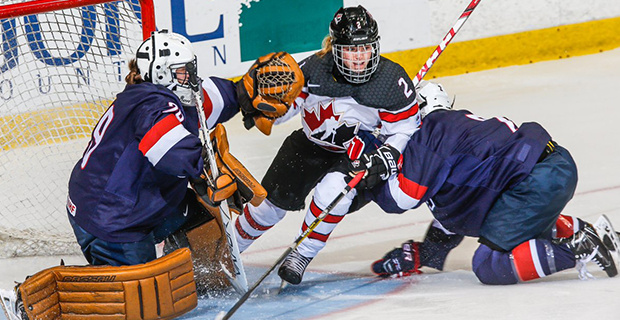 The Canadian Under-18 women’s team tripled the U.S. shot total but could not find the back of the net, losing the final match on Sunday of the three-game series.

Dropping a 3-1 decision, Canada also lost the annual summer series winning just one out of the three games played in Lake Placid New York against the U.S. under-18 national team. Canada still holds the all-time edge in the summer showdowns, 18-15.

“Certainly it feels good to win, but I was more impressed with how we played and showed some resiliency after Game 2,” said U.S. head coach Joel Johnson. “It got close in the third and I was really proud of the effort, especially defensively that our players showed. It was fun to watch and certainly an exciting series.”

Highlights from today’s 3-1 victory over Canada at the #U18Series.

It wasn’t until 6:02 of the third period that Maggie Connors (St. John’s, N.L./Shattuck-St. Mary’s, USHS) put Canada on the board 2-1. Her power play goal put Canada within one goal of the U.S. but the U.S. two-goal lead was regained five minutes later when Hannah Bilka beat Canadian netminder Madelyn McArthur (St. Catharines, Ont./Oakville, PWHL) on a wraparound.

Abbey Murphy opened scoring for the U.S. just after the 12 minutes mark in the first period, ending McArthur’s shutout streak of 98 minutes. The goalie shut the U.S. out in the minutes she played in the first game of the series (a 4-1 loss) then kept the U.S. off the board in the second game, which Canada won 3-0.

The U.S. lead was extended 2-0 thanks to a powerplay goal in the second period. Madeline Wethington scored from the top of the left face-off circle.

Canada will name the roster for the national women’s under-18 team that will play in the 2018 Women’s World Championship in Dmitrov, Russia in mid-December. Players that were in the three-game series will return to their club teams to open the 2017-18 season.