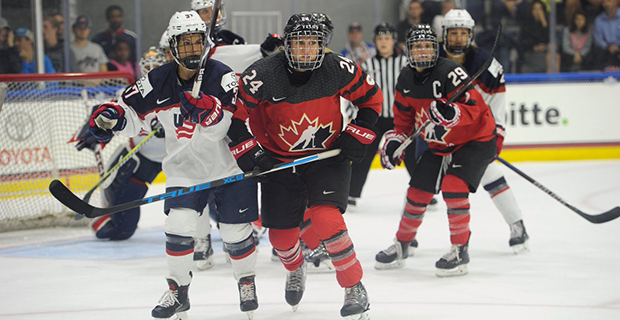 Trips to the penalty box got the Canadian women’s national team in trouble against the U.S. in their second game at the Four Nations Cup in Florida.

The U.S. women’s team defeated Canada 4-2, scoring three of their goals on the power play.

“The score is really a reflection of the team’s commitment,” said Robb Stauber, U.S. Women’s National Team head coach. “Anyone who watched this game tonight saw a team that was very committed from start to finish. We did so many things right tonight, and it is a great thing to build off of as we continue the tournament.”

Cayla Barnes opened scoring 15 minutes into the first period on the power play when her shot deflected off a Canadian player and past Ann-Renée Desbiens (La Malbaie, Que./University of Wisconsin, WCHA).

The U.S. went up 2-0 when Megan Bozek’s slap shot from the top right circle found the back of the net with 2:50 left in the first period.

Canada cut the lead in half early in the second period when Rebecca Johnston (Sudbury, Ont./Calgary, CWHL) streaked down the right wing, cut in front of the net and tucked the puck past U.S. goalie Maddie Rooney.

The U.S. charged into the final frame, striking again just under a minute into play when Kendall Coyne picked up a loose puck during a goalmouth scramble and fired it into the net.

Playing shorthanded, Canada once again brought the game within reach when Meghan Agosta (Ruthven, Ont./Hockey Canada) stole the puck off a U.S. player on the Canadian blue line and sprinted down the ice letting a wrist shot go over the glove of Rooney.

That was dashed just 29 seconds later when Alex Carpenter fired a wrist shot past the Canadian netminder to seal the 4-2 victory for the U.S.

The U.S. team defeated Finland 8-2 in their opening game.

Canada will face Finland next on Friday, Nov. 10 and the U.S. will play Sweden. The third place game takes place on Nov. 12 and the championship game will be played at 3:30 p.m.