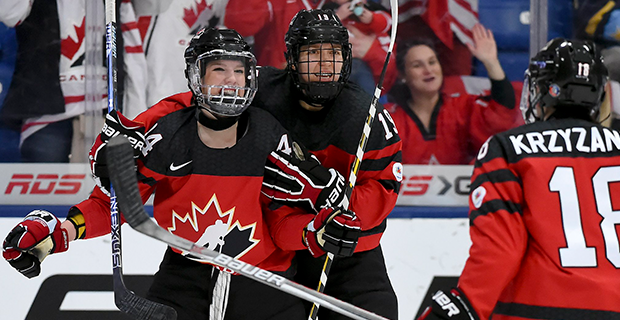 Canada will play for gold at IIHF Women’s World Championship.

While it wasn’t the road to gold that they thought they would take skating into the tournament, the bumpy path might have sparked something in the team as they head into the final tonight against the U.S.

“There was some redemption there tonight (against Finland), but we didn’t focus too much on the past. We just continued to learn and get better as a team. We’ve been successful in doing that and focusing on our systems, the little details and habits that help us win and not just expect it. We’ve had to work for it and it’s been a good awakening,” said Canada defenceman Jocelyne Larocque (Ste. Anne, Man./Brampton, CWHL).

Losing two of their three preliminary games forced Canada into the semifinal, a rematch against one of the best teams Finland has iced at this tournament. A team that earlier shocked Canada defeating them 4-3, the first time they have ever beaten them in the tournament’s history. However, this time things were different. Canada came out with speed and were backed by goaltender Shannon Szabados whose 23-save performance earned her a second straight shutout  in the 3-0 win sending them to the final.

“I thought we had a good start tonight, one of our goals was to play fast and I thought we executed on that,” said Canada’s head coach Laura Schuler (Scarborough, Ont./Dartmouth ECAC). “It was really important for us to get pucks deep on Finland early and our team did a really great job of buying into the game plan. Moving forward we have to continue to execute the details, we have to make sure that our habits are there and if we do that, we can be successful.”

It wasn’t until late in the first period that Canada found a way past Finnish netminder Noora Raty. Sarah Potomak (Aldergrove, B.C./University of Minnesota, WCHA) redirected a point shot off the side of the net then hopped on a rebound to give them a 1-0 lead.

Canada then cashed in on a power play with Rebecca Johnston (Sudbury, Ont./Calgary, CWHL), putting them up 3-0.

Szabados didn’t have a lot of action at the beginning of the game but came up with big saves when needed. She is the first Canadian goaltender since 2009 to post back-to-back shutouts at the tournament.

The U.S. played Germany, easily skating to an 11-0 win, with 13 different players recording a point.

Four U.S. goals in the second period were scored 2:20 apart, setting a record for the four fastest goals scored in U.S. women’s national team history at this event.

They will play Canada on Friday at 7:30 p.m. (EST) in what the team has said should be an electric atmosphere in front of their home crowd.

“Canada is a great team and anytime we play them its a rivalry and it is going to be a battle. We are looking forward to getting out there and it being very fast pace and a very hardworking game,” said U.S. defenceman Megan Keller.

Germany and Finland will face off for the bronze medal.