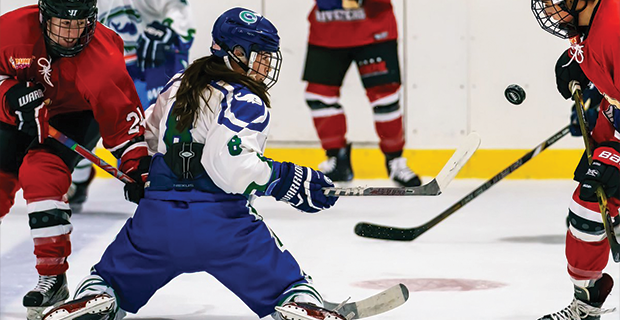 Canadian Kelly Babstock, who is playing with the Connecticut Whale in the National Women’s Hockey League, was selected to an all-star squad representing the league against the U.S. women’s national team in two exhibition games as they prepare for the Olympics. (Courtesy of the NWHL)

Two Canadian players were chosen to be part of the National Women’s Hockey League all-star squad that will help prepare the U.S. national women’s team for the 2018 Olympics.

The 12 forwards for the NWHL team were announced on Dec. 27 and include Kelly Babstock (Mississauga, Ont./Connecticut Whale, NWHL) and Jess Jones (Buffalo Beauts, NWHL).

Jones co-led the Canadian Women’s Hockey League in scoring with Team Canada captain Marie-Philip Poulin last season. This is her first season in the NWHL.

“This is an amazing opportunity. I’m so honoured and excited,” said Jones. “I think what I’m most excited about is playing at such a high level. The U.S. team is at the top of their game, right before the Olympics, so I’m anticipating a competitive and intense game, which is always fun.”

Jones plays alongside two other CWHL players who decided to jump to the NWHL this season — Sarah Edney and Rebecca Vint.

Babstock, a power forward, leads the Whale in scoring this season with 19 goals and 22 assists. She led the team in scoring throughout the playoffs last year and tied for regular season scoring on the Whale with two-time Olympic silver medalist Kelli Stack (who has since jumped to the CWHL to play the inaugural season of the Vanke Rays, based out of China).

“It was really exciting hearing that I got the opportunity to play against Team USA. It should be a good couple games with Team NWHL and we are excited to push the U.S. so they’re ready for their trip to South Korea,” said Babstock. “At the end of the day, it’s all for the growth of the game and I show up and prepare for hockey games, not just for myself but for something bigger than myself and that’s the youth.”

Excited to play on #TeamNWHL to play a couple games for Team USAs final tune-ups. Shoutout to my Pod and whale fans #finsup whale🏒 https://t.co/NOHcmshMka

Team NWHL was selected by general manager Hayley Moore in consultation with the coaches of all four NWHL clubs. The team will be led by Metropolitan Riveters head coach Chad Wiseman, with assistance from Boston Pride coaches Thomas Poeck and Lindsay Berman.

As a U.S. hockey alum, Lawyer said she is honoured to be named to the NWHL roster to play against many of the players she is still close friends with.

“My very best friend is Meghan Duggan. We met playing hockey in eighth grade and were teammates throughout high school and college. In 2010, we found ourselves walking side-by-side, with our jaws dragging on the floor in disbelief as we took that lap during opening ceremonies in Vancouver. We became Olympians together,” said Lawler. “We make each other better. We empower one another. We have the best friendship in the world and I couldn’t feel more honoured to step back onto the ice with her and the rest of my buddies currently on Team USA to help them prep for success in South Korea.”