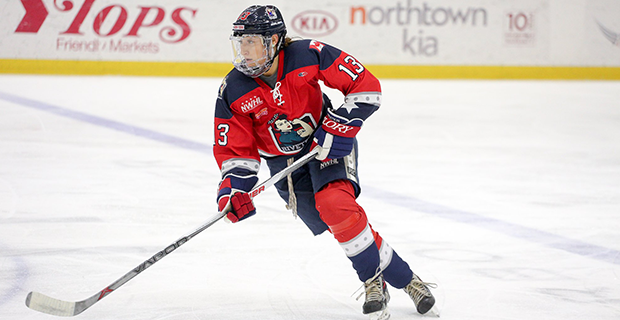 The teams are set and the battle lines drawn as some of the top players in the National Women’s Hockey League will shine in Pittsburgh at the all-star game.

Had a great time selecting my 2017 NWHL All-Star team. Toughest and worst part was not being able to pick so many deserving players weary

“Had a great time selecting my 2017 NWHL All-Star team. Toughest and worst part was not being able to pick so many deserving players,” said Kessel on social media after the draft.

The all-star weekend, which takes place Feb. 11 to 12, will again have a skills component and Kessel wasn’t too shy about her thoughts on that. Among her picks was Hilary Knight (Boston Pride), who Kessel predicted will win all the shooting competitions and that one of her other picks, Gigi Marvin (Pride), would be a force in the shootout.

Steadman, who scored the first goal in the inaugural NWHL all-star game last year, was also boasting about her team including last year’s hardest shot competitor Kaleigh Fratkin (Burnaby, B.C.) who plays for the Riveters.

Thankful I won't have to block her shot at any point in the ASG @fratkin13 welcome to #TeamSteady #ouch https://t.co/7B2a7Rkf2d

Steadman has proven sniper Shiann Darkangelo (Beauts) on her roster. At the 2016 all-star game Darkangelo his all four targets in the shooting accuracy challenge in 25 seconds while Steadman herself knocked down all four within 17.4 seconds.

Canadians Kelly Babstock (Whale) and Ashley Johnston (Riveters) were chosen by a media panel to participate in the all-star weekend. Babstock leads the NWHL in scoring with six goals and six assists. Johnston, the captain of the Riveters, is regarded as one of the top all-around defenders in the league.

The 2017 NWHL Skills Showdown will take place on Feb. 11 (4 p.m. ET/) and the NWHL All-Star Game will begin at 3 p.m. (ET) on Feb. 12. Both events will be at the UPMC Lemieux Sports Complex, the state-of-the-art practice facility of the Pittsburgh Penguins.