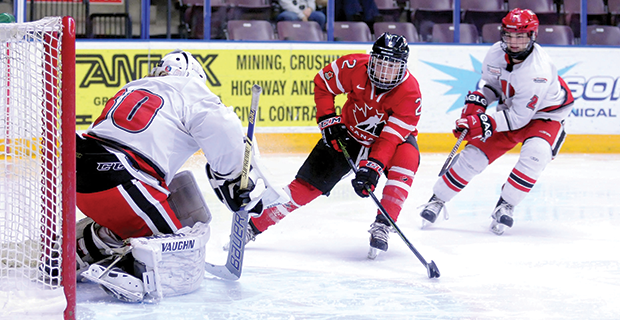 Meghan Agosta cuts to the net during an exhibition game at the South Okanagan Events Centre in Penticton, B.C. held before the 2016 IIHF Women’s World Championship. (Kristi Patton/HockeyNow)

Four players will make their world championship debut for Canada as they try to end a three-year drought at the IIHF Women’s World Championship March 31 to April 7 in Plymouth, Michigan.

Included on the list of rookies is Sarah Potomak (Aldergrove, B.C./University of Minnesota, NCAA) who was recently announced as a nominee for the Patty Kazmaier trophy given to the most valuable player in the NCAA. She joins Erin Ambrose (Keswick, Ont./Toronto, CWHL), Laura Stacey (Kleinburgh, Ont./Brampton, CWHL) and Renata Fast (Burlington, Ont./Toronto, CWHL) to round out the newbies on Team Canada. Both Stacey and Fast are nominees for the rookie of the year award in the Canadian Women’s Hockey League.

“This is a determined group of players that have been chosen to wear the red-and-white on the international stage,” said Laura Schuler, head coach of Canada’s National women’s team. “As our evaluation process continues leading into the selection of our Olympic centralization roster later this year, we’re confident this group will make Canada proud in Plymouth and we’re looking forward to building on our successes from the 2016-2017 season.”

Canada has lost the last two world championships to the U.S., most recently at the 2016 tournament in Kamloops, B.C. They last won gold in 2012, when an overtime goal lifted Canada to a 5-4 win in the finals over the U.S. The tournament takes place annually in non-Olympic years.

A familiar will be returning to the team, but behind the bench. Four-time Olympic gold medalist Caroline Ouellett was named an assistant coach alongside Dwayne Gylywoychuk and Troy Ryan.

There has been some movement on the roster and in player availability since last year. Hayley Wickenheiser recently announced her retirement opening up a spot on the squad.

Read more: She is legend. Hayley Wickenheiser, a career retrospective

The front line will also be missing Jamie Rattray and Jillian Saulnier will not suit up. Canada filled those spots with Hayley Irwin (Thunder Bay, Ont./Calgary, CWHL), who was on the 2014 gold medal winning squad, and rookies Potomak and Stacey.

On defence, first-timers Ambrose and Fast are stepping in for Brigette Lacquette and Tara Watchorn.

Other changes to last year’s squad will come between the pipes. Emerance Maschmeyer, who was named Best Goalkeeper at the tournament in 2016, returns, but Shannon Szabados (Edmonton, Alta./Fort Saskatchewan, Chinook HL) and Genevieve Lacasse (Kingston, Ont./Calgary, CWHL) will be joining the team this time around. Szabados hadn’t been on the ice with the national team since she helped Canada to the Olympic gold medal in Sochi. That is, until December when she joined the team for a two-game exhibition series against the U.S.

Canada swept that series, with Marie-Philip Poulin scoring an overtime winner and Szabados earning the win. Szabados was also put in relief for the first game of the series for an injured Ann-Renée Desbiens, a game that Canada also won.

The U.S. has yet to officially name their team for the 2017 world championship.

The tournament is a critical step in the evaluation process leading up to who will be centralized in Calgary next season as they prepare for the 2018 Olympics. The announcement for the centralization roster is expected to happen in the spring.

Competing at the 2017 Women’s World Hockey Championship, in ranking order, are USA, Canada, Russia, Finland, Sweden, Czech Republic, Switzerland and Germany. Russia defeated Finland in the shootout of the bronze medal game in 2016, just the third time they have medaled at the event.

Canada will open the tournament against the United States on March 31, then face Finland on April 1 and Russia on April 3 in the preliminary round.