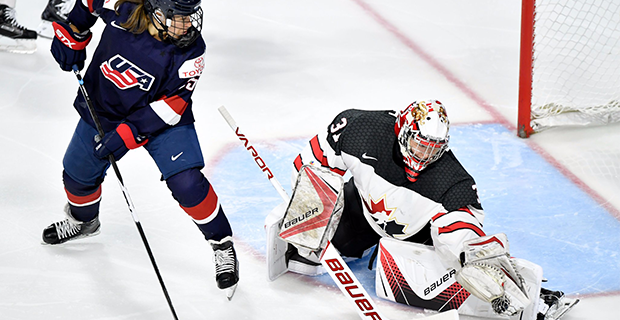 Canadian netminder Genevieve Lacasse scoops up the puck during the second of a six game series against Team USA. (Courtesy of Hockey Canada)

Canada’s special teams also were on full display in the re-match after suffering a 5-2 loss days earlier in Quebec City.

“It was huge to comeback after that loss, I think we learned a lot from it and we were able to build and improve on a lot of things and today it showed playing a much more aggressive game and taking it to them when we had the opportunities,” said Canadian forward Natalie Spooner.

After two visits to the penalty box in the first six minutes of the game, Canada settled in with Spooner opening scoring.

The U.S. evened the game 1-1 under four minutes later when Emily Pfalzer picked up her own rebo

While on a shorthanded rush, Laura Fortino converted a pass from Jillian Saulnier in the second period to re-take the lead.

Lacasse was sharp for Canada in the middle frame, while Canada’s offence stumbled only getting one shot until the 15-minute mark of the period.

While the shots came in short bursts for Canada, so did the goals. Of the six pucks fired at the U.S. net in the final five minutes, two crossed the goal line. Spooner notched one on the power play and Meghan Agosta fired the puck off the goalpost and in to give Canada a 4-1 lead.

“We just had to refocus. We had a team talk and again we just needed to believe in ourselves and have that confidence to go out there and put the past in the past and today was a new day. A new day to prove to the world we are better than we were in that game,” said Agosta on the bounce back win.

Natalie Hensley was brought in to start the third period in relief of Alex Rigsby.

Canadian captain Marie-Philip Poulin scored the only goal of the third period, intercepting a pass in the offensive zone and shelving the puck short side to give Canada the 5-1 victory.

“We didn’t do very many little things right and had a lot of missed opportunities that affected the outcome of the game,” said Robb Stauber, head coach of the U.S. team. “Games like this really shed light on what you have to do to get better.”

While the series does not resume until Dec. 3 in St. Paul, Minn. the two rivals could meet again much sooner. The 2017 4 Nations Cup takes place in Tampa Nov. 7 to 12.