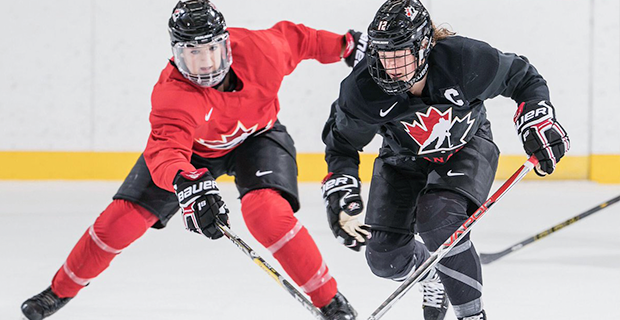 Canada has announced the 23-player roster for the Women’s Under-18 World Championship. (Hockey Canada images)

Canada’s National Women’s Under-18 Team will be heading to Russia with four returning players that won silver at last year’s tournament.

“We’ve had an opportunity to evaluate a very large pool of talent in this age group through our summer camps, with their club teams this season, and at the U18 national championship in Quebec City, and these 23 players have exhibited the on-and off-ice qualities we are looking for to represent Canada,” said Collins, a national team alumna who was an assistant coach with Canada’s 2015 and 2017 IIHF U18 Women’s World Championship teams.

“We have four players who bring not only their hockey talent, but also their experience from last year’s world championship to this team, and we are really excited about the energy we’ve seen from all 23 players.”

The roster also features 18 players who competed as part of Canada’s national women’s under-18 team in a three-game series against the U.S. in Lake Placid, New York in August.

Canada lost the annual summer series, winning just one of the three games.

McQuigge captained the 2017 under-18 team that played to silver while the three other returnees served as alternate captains. The U.S. won gold for the third year in a row, defeating Canada 3-1.