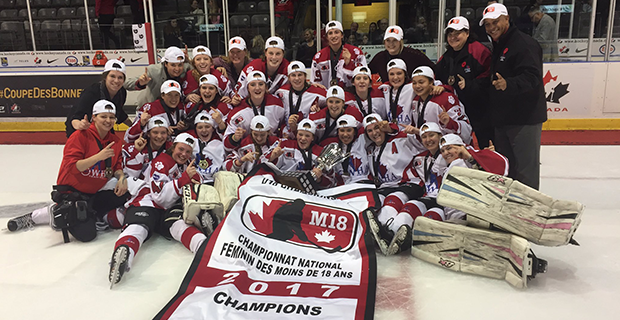 Ontario Red won the gold medal at the Under-18 National Women’s Championship for the fourth year in a row. (Courtesy of @OWHAhockey/Twitter)

It was a bumpy road, but Ontario Red completed the four-peat at the 2017 National Women’s Under-18 Championship.

“We battled through a lot of adversity this week, but we really stuck together as a team — especially in the second period, we came together. The energy on the bench definitely helped us,” said Sarah Fillier (Georgetown, Ont./Oakville, PWHL), who earned two points in the game. “It’s just an amazing feeling, especially to do it again this year, and with a great, great group of girls too.” (from hockeycanada.ca)

The two squads lined up against each other just days earlier in the preliminary round with Blue coming out on top 3-1, thanks to Blue’s Courtney Correia’s (Whitby, Ont./Toronto, PWHL) three points 2G, 1A). Red managed to silence her in the gold medal game.

Blue kicked off scoring early in the first period with a goal from Alexa Hoskin (Belleville, Ont./Kingston, PHWL), assisted by the tournaments top point earner Nicole Kelly. (Brantford, Ont./Etobicoke, PWHL). That lead would not last to the end of the first period. Fillier tied the game up 1-1 and then assisted on Tam’s power play goal in the second for Red to take the lead. Lauren Bellefontaine (Kemptville, Ont./Nepean, PWHL) added the insurance goal just before the midway point of the second period with an assist from Zoe Boyd (Caledon East, Ont./Mississauga, PWHL).

Ontario Red suffered an upset loss in the opening of the preliminary round to Atlantic 2-1, shut out Alberta 2-0 and then lost to Ontario Blue. In the semifinal they walked over B.C. 6-1.

Congrats to Team Blue on winning silver at the U18 Nationals. pic.twitter.com/UJs6G3qA62

B.C. Repeats as Bronze Medal Winners
It was a nail-biter finish for the bronze medal with B.C. and Saskatchewan battling to overtime for a decision.

Locked 1-1 after regulation time, B.C. dominated the 10-minute four-on-four overtime, putting 10 pucks on net compared to Saskatchewan, who didn’t register one shot on goal. A theme consistent throughout the game with B.C. outshooting Saskatchewan 48-22.

“It was another exciting one, wasn’t it?,” said B.C. head coach Graham Thomas. “I give Saskatchewan a lot of credit — they play hard, they play well, they play a good team game and they’ve got a great goalie as well. It was intense, it was fun to be a part of and I’m really proud of our group to show their resiliency and not panic, have some composure. Because when a goalie’s really hot and tough to score on, sometimes it can allow you to break down a little bit. We did a good job of staying disciplined and focused through all of that.”

Congratulations to British Columbia who goes 4-1 at #U18Nationals and brings home bronze with a 2-1 OT win over Sask. 📸HockeyCanadaImages pic.twitter.com/d1bCZFthkz