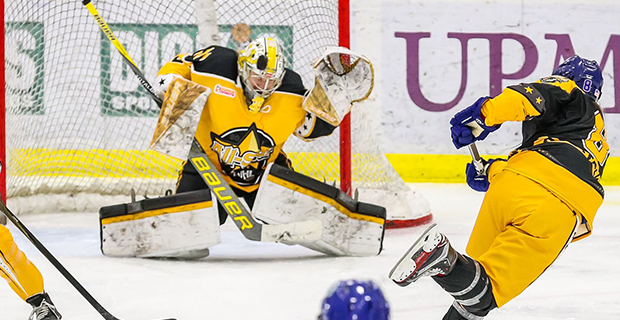 The NWHL is once again partnering with the NHL for their All-Star Weekend. Last year the NWHL held the weekend in Pittsburgh and partnered with the Penguins. This February the game will be played in Minnesota. (Courtesy of the NWHL)

The National Women’s Hockey League announced a partnership with the NHL’s Minnesota Wild to host the 2018 NWHL All-Star Weekend on Feb. 10-11 in the Twin Cities.

“We are so proud to have the opportunity to present the NWHL All-Star Weekend in St. Paul,” said commissioner Dani Rylan. “As we strive to enhance our league and promote the women’s game, our goal has been to showcase the great players of the NWHL beyond our original four markets. We’re thankful for this partnership with the Minnesota Wild, a top NHL franchise that does so much for the development of hockey across all levels and genders.”

After the NWHL’s successful sold-out 2017 All-Star Weekend in Pittsburgh, the league is again taking its all-star events to a neutral site and major market – in this case, the State of Hockey.

Rosters were chosen from players on the four teams (Boston Pride, Buffalo Beauts, Connecticut Whale and Metropolitan Riveters) on Jan. 22. For team captain and Beauts goaltender Amanda Leveille (Kingston, Ont.), an Isobel Cup champion in 2017, it is return to her old stomping grounds. She played at the University of Minnesota Golden Gophers from 2012-2016, winning three national championships in four years.

Among the players she selected is Sarah Edney, who previously played two seasons with the Brampton (now Markham) Thunder in the Canadian Women’s Hockey League and was the captain of Team Canada’s under-18 team that won the silver medal at the 2011 IIHF Women’s World U18 Championship. Leveille also selected forward Kelly Babstock (Mississauga, Ont./Whale). Babstock is in her third season with the Whale.

Opposing captain is Boston Pride goaltender Brittany Ott, an Isobel Cup champion in 2016, who was raised in Michigan.

The NWHL also announced the hometown Minnesota Whitecaps, an elite women’s team of the State of Hockey, has accepted the league’s invitation to have two players participate in the skills competition and game. The Whitecaps previously played a series of exhibition games against NWHL teams.

The teams will be coached by a pair of Minnesota residents: three-time Olympian Tricia (Dunn) Luoma, who won gold with Team USA in Nagano in 1998 and Winny (Brodt) Brown, who was a member of the U.S. national team program for a decade.

The All-Star Game format will consist of two 25-minute halves. Each team will have 12 skaters and two goaltenders.