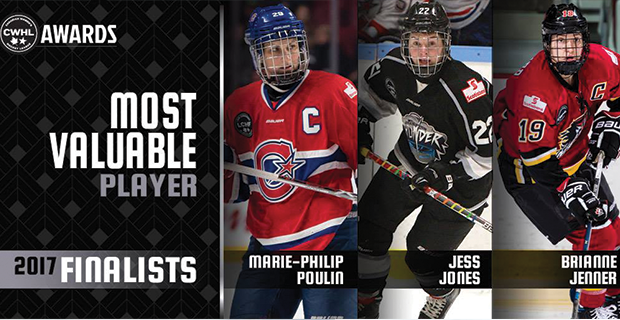 As teams are in the final stretch to the Clarkson Cup championship, the Canadian Women’s Hockey League announced award nominees.

With six nominees in the running for awards, not including Marie Philip Poulin co-sharing the Angela James Bowl, one would almost think Les Canadiennes de Montreal were the top regular season team. However, the Chairman’s Trophy winner with a record of 20-4-0-0, Calgary Inferno, weren’t too far behind in nominations with five.

Here is a list of award nominees and how each of them break down:

Coach of the year

Scott Reid (CGY)
After working as the goalie coach for Team Japan at the 2014 Olympics, Reid moved up from assistant to head coach of the Inferno in February 2014 and led them into the playoffs, where they lost to eventual runners-up Montreal. In his second year as bench boss, Reid was nominated for Coach of the Year. He took the team all the way to the finals and eventually hoisted the Clarkson Cup. This season he helped elevate the team once again as regular season champions.

Dany Brunet (MTL)
With 25 years of coaching experience behind him, Brunet was the 2015 Coach of the Year and being nominated again is no fluke. Bench boss for the Canadiennes for four years, he is known as a technician, tactician and teacher with an outstanding reputation in Quebec hockey for developing players and programs.

Brian McCloskey (BOS)
It has been a tough couple of seasons for the Boston Blades. Once an annual contender for the Clarkson Cup, the team suffered the loss of several U.S. Olympians who signed on with the National Women’s Hockey League. With the exit of so many players, the Blades hired McCloskey, who had trouble of his own after a controversial dismissal from the University of New Hampshire for an altercation with a player. Just like the team, McCloskey is rebuilding his 33-year coaching career. A hardworking and passionate coach, McCloskey has improved the teams record from the previous year.

Rookie of the year

Laura Stacey (BRA)
Stacey’s great grandfather Francis King Clancy wore No. 7 with the Toronto Maple Leafs and she continues that tradition as a member of the Brampton Thunder. Just like the NHL trophy named after her grandfather, Stacey has leadership qualities that extend beyond the ice. Stacey finished the season second-best on the Thunder in scoring, assists and points. Out of the rookies this season, Stacey was the leader in points with 24.

Renata Fast (TOR)
The Furies had a strong draft year looking to fill holes on defence with several players. They did just that when they chose Fast second overall. They also added a punch of offence as she recorded four goals and five assists during the regular season, good for 10th overall out of defensemen in the league.

Iya Gavrilova (CGY)
Prior to the start of her rookie campaign, Gavrilova wasn’t too sure where her place would be on a roster full of Canadian Olympians.

Despite questioning her skills, the former University of Calgary Dinos CIS (U SPORT) champion and player of the year who also has played in three Olympics with the Russian national team, had no issues sliding into her CWHL skin.

“There is a lot of good players there so it is an honour to be a part of the Inferno," said Gavrilova. "I honestly don't care who I line up with. Everyone is so good that it doesn't matter. I just hope I can keep up with them."

That was the quote she offered way back in October. Fast-forward to the end of the regular season and she has 21 points and has definitely left an impact with the Inferno in her first CWHL season.

Defenceman of the Year

Laura Fortino (BRA)
Fortino stepped up with the offence the Thunder needed from their blue line this year. She led all defence in scoring with six goals and 13 assists. Only teammate Courtney Birchard scored more points than her on the power play and Fortino netted two game-winners on a team that led the league in penalty minutes.

Meaghan Mikkelson-Reid (CGY)
Consistency is what Mikkelson-Reid offers on the blue line for the Calgary Inferno who were backed by a trio of excellent goaltenders this season. Mikkelson-Reid had 15 points this year, good for third overall among defencemen. Not only did she have five power play points, the defenceman chipped in on the penalty kill. Out of the three nominees, she had the best plus-minus rating at +13. The Inferno held the best penalty killing record of all the teams in the regular season.

Cathy Chartrand (MTL)
Playing on a team with a lot of attention on what is happening on offence and teammates who were chasing after CWHL records, Chartrand was a standout on defence. Many of those goals scored by Les Canadiennes were thanks to the defenceman who assisted on 15 of the markers. She finished second overall in points among defencemen and had the most helpers. A force on the power play, Chartrand had eight of her points with the man advantage and two of her goals were game-winners.

Goalie of the Year

Charline Labonté (MTL)
Labonté is on the hunt for the three-peat win in this category. With five shutouts this season she is just a few away from setting a CWHL record for most career shutouts, a title held by Sami Jo Small (14). Les Canadiennes goaltender had 11 wins in 15 games, held a 1.53 goals against average and .934 save percentage.

Geneviève Lacasse (CGY)
On a team stacked with talent between the pipes, Lacasse has a solid record of 8-1-0-1, but still falls behind teammate Emerance Maschmeyer who was not nominated. No stab at Lacasse, she had a 2.00 goals against average and a .921 save percentage.

Christina Kessler (TOR)
Kessler can singlehandedly help her team to wins, proven just this past weekend where she turned aside 49 shots to help the Furies upset the Inferno in Game 1 of their playoff series. The goalie held a 2.20 goals against average, a .920 save percentage in the regular season and finished with six wins and 11 loses. Kessler also was tested by the best the league has to offer at the all-star game where she recorded a shutout.

Marie-Philip Poulin (MTL)
Six game-winning goals, seven power play points, four shorthanded and a league leading plus-minus of 24, along with earning the title of co-winner of the Angela James Bowl, many are left wondering: What can’t Poulin do?

Jess Jones (BRA)
Her fourth season in the CWHL has been a breakout year for Jess Jones as she skated to a tie with Poulin for the Angela James Bowl title, knotted at 37 points each in the regular season. Along with fellow MVP nominees Poulin and Jenner, Jones also had a five point game this year. She held a +16 plus-minus rating, netted three game winners and 11 points on the power play. Out of the three nominees, Jones is the only one who isn’t a national team player. Her previous best season was when she earned 24 points.

Brianne Jenner (CGY)
Jenner led the highly talented roster of the Calgary Inferno, that feature many Canadian national team members, with 27 points. Her +13 rating, six power play points and two on the penalty kill are all standup reasons why she was nominated for the Most Valuable Player Award.

Jayna Hefford Trophy (MVP voted on by the players)

Bettez was the league’s top goal-getter (18G) and notched 15 points in January alone. She also holds the title this season for scoring the most shorthanded goals (3). Jones was the Thunder’s leading goalscorer (17G, 20A) and their highest since Gillian Apps collected 29 points in the 2011-2012 season.