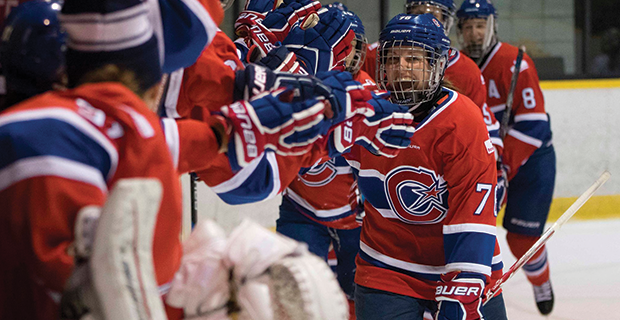 Les Canadiennes de Montreal punched their ticket first to the Clarkson Cup and within 24 hours found out they would be facing the defending champion Calgary Inferno for a rematch of last season’s final.

If there is one thing the teams can agree on, it is that they are evenly matched from the goaltender out.

“Absolutely. It is going to be a high-tempo game and we have to be able to match their speed. We are very comparable. We both have great goaltending, solid defence, the best forwards in the world. Every time we play against each other it is great hockey. Both teams play with skill, speed and passion,” said Canadiennes forward Caroline Ouellette.

Look no further than the regular season record to prove that point. In the six regular season games they faced off against one another, both took three wins. In most of those games, they were separated by just one or two goals. It all shapes up to what is touted to be a great match for the CWHL Clarkson Cup title on Sunday, March 5 at the Canadian Tire Centre in Ottawa.

“The Clarkson Cup will be a battle and could come down to the last person who shoots will win,” said Inferno head coach Scott Reid.

Goaltending will be the toughest decision for the Inferno. National team netminders Genevieve Lacasse and Emerance Maschmeyer have spent most of the time guarding the Inferno goal this season, but they also have Delayne Brian, the 2016 Clarkson Cup MVP. Maschmeyer was given the nod in the best-of-three semifinal against the Toronto Furies. The Furies shocked the Inferno coming out with a Game 1 win, standing on the back of their netminder Christina Kessler’s play. The Inferno bounced back to take the next two games to earn their way to the Clarkson Cup final. 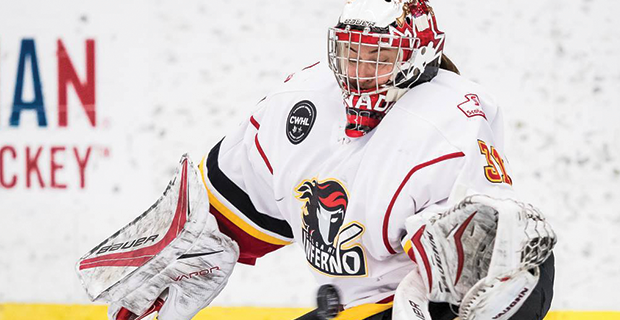 CWHL top goalie nominee Genevieve Lacasse started Game 2 and Game 3 against the Toronto Furies after the Inferno lost the opening match of the playoffs. The defending Clarkson Cup champions will face Les Canadiennes de Montreal in the finals on March 5. (Photo courtesy of CWHL)


Les Canadiennes faced the Brampton Thunder in the other semifinal, taking the first two games to clinch their spot 7-1 and 5-1.

Marie-Philip Poulin, co-winner of the Angela James Bowl for most points in a season, played a big role in that with four points in the two games along with Chartrand who had four assists and a goal. Players that everyone has their eye on when they hit the ice.

“We aren’t too worried about matching up player to player. They will be aware when players like Poulin are out there, we know she is dangerous,” said Reid. “We also have players equally as dangerous like (Brianne) Jenner, (Rebecca) Johnson and (Hayley) Irwin — all Olympic gold medalists and some have been her linemates.”

Jenner netted two goals in the Inferno’s win over the Canadiennes to capture the Clarkson Cup last season. A memory that still stings a bit for some of the Canadiennes as they make their sixth trip to the finals in eight years.

“We know they have a great team and they are solid at every position,” said Ouellette. “We will have to play disciplined and use our speed to create as many chances as we can to put pucks on the net.”

It has been an extraordinary season for Ouellette as she chased CWHL records and played in front of 6,000 fans at the Bell Centre in Montreal, the home of her favourite NHL team while she was growing up. Winning the Clarkson Cup would just be icing on the cake for her.

“I love this team so much and I know next year we will lose a few players to Olympic centralization and maybe a few to retirement. We have this one game left and I want to enjoy every moment of it,” said Ouellette who said she will see how she feels over the summer to determine if she will suit up again next season for the Canadiennes.

“It is very special playing with my best friends, girls I have played hockey with for over 10 years. We have been together through so much and watched and helped this league grow to what it is today. It would mean so much to win another cup. It has been a few years and I realize just how tough it is to win it all and being able to share it with these teammates, especially those who have never won it before like our goalie Charline (Labonté), it would mean everything.”