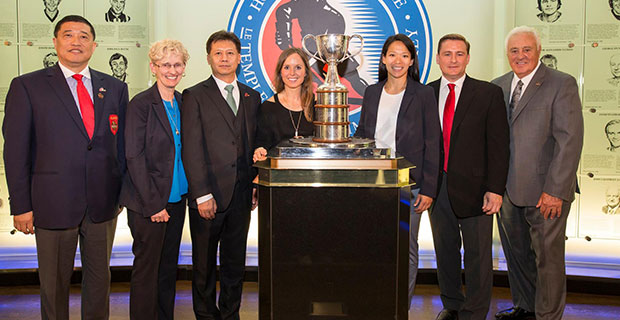 Eight years ago, the Canadian Women’s Hockey League held their first draft at the Hockey Hall of Fame.

In early June, commissioner Brenda Andress stood in the same building announcing the CWHL is expanding their borders outside of North America.

Much to the chagrin of the well-traveled Calgary Inferno, it will not be a western Canadian team or a hop over the border to another U.S. team. The CWHL is moving to the far east, as China’s Kunlun Red Star enters for the 2017-18 season.

“I guess it is only fitting that we find ourselves in the great hall because after tonight’s announcement women’s hockey as we know it will change for the better and it will only continue to grow,” said former Canadian Olympian Tessa Bonhomme, who was the first ever player drafted into the CWHL.

“This is a marriage across the Pacific between Canada, North American women’s hockey and the Chinese hockey team,” said Kunlun Red Star chairman of the board Alex Zhao, of who has partnered with the Chinese government to boost hockey in the country ahead of the 2022 Olympic Games hosted in Beijing.

The deal will provide a new source of income for the CWHL, as KRS will pay to play in the league. It will also give an opportunity to attract business sponsors, more fans and follows the mission of the CWHL to grow the game and opportunities for women.

Andress promised last season that players would be compensated this year, and while that plan is still in play, the CWHL has not released anything on how much players can expect to receive. Players currently are compensated in the form of receiving some of their equipment at no cost and bonuses for performance. They have yet to be paid a full salary, a model that the National Women’s Hockey League has tested out with their four-team league based in the U.S. That model ran into trouble last season which meant cutbacks to players’ already small salaries that were in the range of $10,000 to $26,000 U.S. Andress said during the press conference at the Hockey Hall of Fame that KRS would have to follow the CWHL’s salary cap policy.

The NWHL and Russian Ice Hockey Federation have come up with their own international collaboration, however not on the same scale. The Russian women’s national team will be in the U.S. in October for two weeks of training and competition. The Russians played five preseason games against NWHL clubs in 2016. NWHL commissioner Dani Rylan said they celebrate all giant steps forward for women’s hockey, offering her congratulations to the CWHL-KRS deal

Kelli Stack, who was left off the U.S. centralization roster for the 2018 Olympics, and Finnish national team goalie Noora Raty have already signed on to play with the Chinese team, which will be based in Shenzhen (considered to be the Silicon Valley of China).

Raty planned on joining the men’s team Nokia Pyry in Finland for the upcoming season, when she received a contract offer from KRS. She told a Finnish news outlet that the salary she will receive with KRS, “pays back all the financial losses” she has as a female player in the game for 20 years without much compensation in comparison to a male hockey player.

Related: Players Around the World Chime in on U.S. Women’s Hockey Boycott

The goaltender will continue on with the Finnish national team as they get ready for the Olympics, leaving the KRS to train and play when the time comes and then return for CWHL playoffs. Not only will she be between the pipes for KRS, she will also be a mentor and help promote the game in China in order to earn a full salary.

“It has always been a dream of mine to play female pro hockey,” Raty told HockeyNow. “My first job there will be as a mentor to help grow the game and female sport globally and then getting to play will be secondary. What they want to do with female hockey and grow the game in the world is so exciting. I hope that in 10 years the youth today will have it better than my generation.”

Seeing her name engraved on the Clarkson Cup would also be a perk too.

“Oh yeah definitely. It would be fun to win another trophy and I think the Canadian league is the best one out there for females.”

Raty said when she told hockey colleagues about the opportunity she was given it was a bit of disbelief.

“It is still surreal. A lot of people thought it was a joke, but it definitely isn’t. They are a real business and want to grow the game. With how much focus they are putting on female hockey, China will be a powerhouse one day.”

Perhaps shaking up the vision other countries have for their own female programs.

“I hope so. I hope it wakes some other countries up that China is coming. Hopefully they see this model and do something similar. I think they will have a really, really good team by 2022,” said Raty. “At the same time China is a country with billions of people and more resources so it would be hard to compete with that, but it would be great to see other countries put more resources into their programs.”

Former U.S. Olympian and member of the current Clarkson Cup winners Les Canadiennes de Montréal, Julie Chu described the CWHL deal as incredible news.
“It is a huge step forward for the CWHL, for the stability we provide for elite women’s hockey players in North American and now China and hopefully around the world as well.”
Chu, whose father was born in China, said she was one of the only Asians playing hockey in her hometown of Connecticut when she was growing up and the only female.
“I think this is amazing for the CWHL, for young Chinese girls and all young players to show there are no boundaries for what hockey provides for any of us.”

Looking Ahead
The CWHL teased the announcement beforehand about how they will continue to grow the game, after the first 10 seasons since the inception of the league.

The deal will put the Kunlun Red Star into the league starting this upcoming season and the next four after that. The CWHL season will expand to 30 games with each team traveling to China to play a three-game series and China also coming to North America to play.

China is encouraging growth in hockey and female sport in their country in the lead up to Beijing hosting the Winter Olympics in 2022 and has teamed up with KRS to boost development. Currently, according to the IIHF, out of a population of just over 1.3 billion in China, only 1,100 people play hockey — just 300 of those women. However those numbers have grown considerably and according to an interview in the Toronto Star with a Chinese hockey broadcaster, the Stanley Cup is drawing 22 million viewers — in comparison NBC announced average viewership of five million for Game 1 of the Stanley Cup finals and about four million on Canadian broadcasts.

Well, is there a better group to start a @TheCWHL team? We don't think so!!! pic.twitter.com/Unhi67bnUd

“We’re extremely excited to announce this exciting partnership with the Canadian Women’s Hockey league,” said Zhao, who mentioned they would like to have two teams in the CWHL. “As part of the CWHL, the premier professional women’s league, our mission is to develop a top-tier professional team in order to develop a strong base of female players for our national programs, and new audiences for the sport in China, in the lead-up to hosting the Beijing Winter Olympics in 2022.”

A second team, the Kunlun Red Star Junior, will join the Eastern Women's Hockey Conference next season, calling New England their home. That league recently launched its rebrand from the New England Women's Junior Hockey League and will provide elite-level hockey for players 19 and under. The league said they are committed to preparing its players for collegiate hockey. Teams include the three from the Ontario Hockey Academy (Juniors, Tardiff and U17), with the U17 playing in a Silver Division that only features four teams. Red Star will play in the eight team Gold Division which includes teams from the eastern U.S.

China last played in the Olympics in 2010. The national team program was created in 1992 and finished in fourth at the 1998 Olympics in Nagano. They also have fourth place finishes at the IIHF Women’s World Championship in 1995 and 1997. The women’s national team currently sit 16th overall in the women’s world rankings.
A strong leadership group is hoping to boost exposure to women’s hockey in China and help develop a winning program as they receive an automatic entry to the Olympics in 2022 as the host nation.
Kunlan’s women’s ice hockey team chief coach Digit Murphy is no stranger to the CWHL. She formerly coached the U.S. women’s national team, led the Boston Blades to win the CWHL Clarkson Cup several times as the head coach, is a former head coach of the Brown University women’s hockey team and is the founder of the United Women’s Lacrosse League.
Joining her is Rob Morgan, KRS associate head coach, who previously held the same position with Yale University and was a multiple coach of the year winner with Norbert College. He also worked at Dartmouth College winning two ECAC hockey championships.
The KRS men’s team played in the Kontinental Hockey League in Russia last season, making it to the playoffs. It will be led by former NHL coach Mike Keenan and assistant Bobby Carpenter, a former NHL player. The KRS advisory board includes former NHLer Phil Esposito.
The CWHL regular season schedule will be released in mid-June, with opening weekend scheduled for October.
Back to Top