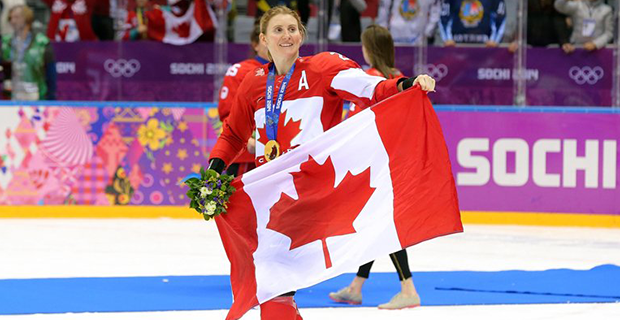 Hockey Canada’s all-time female leader in points and games played, Hayley Wickenheiser, announced she was retiring from the game on Friday via social media. (Hockey Canada)

After 23 years of blood and sweat under a team Canada jersey, it was time for No. 22 to retire.

On Friday, Hayley Wickenheiser, one of hockey’s greatest players, announced she was retiring.

Dear Canada. It has been the great honour of my life to play for you. Time to hang em up!! Thank you! #grateful #graduationday #canada pic.twitter.com/qzEo6sTgP2

While her legacy of goals, a Clarkson Cup title with the Canadian Women’s Hockey League Calgary Inferno, seven world championship titles and four Olympic gold medals will forever be on her stat sheet — it is something else that will carry on in perpetuity. Her leadership.

“The incredible legacy of Hayley Wickenheiser is one measured not just in hockey achievements, in gold medals and world champions, but in the thousands of girls she has inspired to take up the game of hockey and other sports, to live active and passionate lives in all areas,” said CWHL commissioner Brenda Andress. “Her contributions to both sport and improving the lives of girls across the globe will continue long after she has hung up the skates.”

Seven years ago, Wickenheiser put another dream on the ice: building a hockey environment that focused not just on competition but also on building players. The Wickenheiser World Female Hockey Festival has since grown to almost 2,500 players converging over two weekends to play in a hockey tournament and learn from other Olympians and professionals on how to train, be a leader, nutrition and more.

While many of today’s female hockey stars grew up idolizing Wickenheiser, her legacy of inspiration will live on through Wickfest.

Senior national team member Halli Krzyzaniak thanked Wickenheiser for assisting on her first every goal with Hockey Canada and inspiring a generation. Natalie Spooner, national team teammate and CWHL player, also took to social media to send a message of thanks for paving the way for so many females.

What a career @wick_22! From someone I looked up to, to someone I had the honour of playing with! Thank you for paving the way for so many! pic.twitter.com/CZdi9YlloN

Hayley @wick_22, you've inspired a generation of hockey players to play hard and dream big. Congrats on an incredible career.