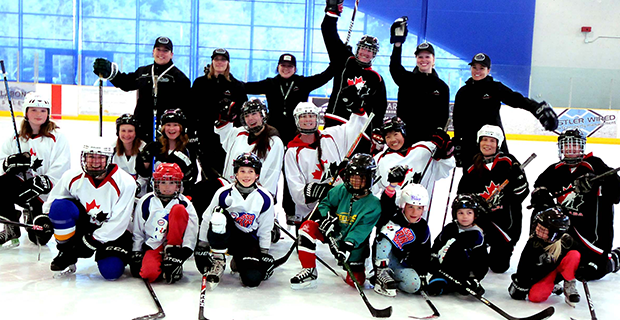 Since getting one minute of air time on Hockey Night in Canada last year, during a special segment featuring positive contributors to the game, the Grindstone Award Foundation continues to grow.

Committed to raising money to help girls facing financial barriers to the sport get on the ice, the registered Canadian not-for-profit is hoping to assist even more girls play hockey this year.

Earlier this year, the Grindstone collaborated with the Toronto Furies to host a girls hockey event with all proceeds donated to the foundation. Over 45 kids, from the ages of eight to 17, skated with some of the Furies and took part in a chalk talk session.

Recently, over two weekends in May, the foundation received a financial boost thanks to the Whistler Spring Fling tournament. The Grindstone held a girls try hockey free event in conjunction with the tournament and Spring Fling organizer Melissa Talaro said it was one of her favourite moments over the two weekends.

“I just saw these two little girls and they had the biggest smiles on their faces. I think that’s when it hit me, what we are doing. They were so happy with their jerseys, they were so excited when they were getting their skates and went finally got on the ice — they were just super happy. I could see their smiles through their helmets. That was a good accomplishment,” said Talaro.

For Grindstone president Danielle Grundy, that is also what it is all about — giving girls a positive experience on the ice and helping grow the grassroots of the game.

The foundation is now accepting grant applications for those needing financial support until Aug. 1. The Grindstone provides bursaries to players across Canada under the age of 19 who have a desire to pursue their goals in athletics. Funding is provided on a basis of financial need and desire, not on hockey ability.

The Grindstone Award Foundation is also hosting their second annual women’s charity tournament, in Kelowna, B.C. from July 20 to 22, and is registering players for the event with proceeds going to bursaries to provide financial support and equipment to female hockey players in need.

“Our goal this year is to make this weekend bigger and better in hopes of raising enough funds to support 30 female hockey players for this upcoming season,” said Grundy. “Play in a tournament and make a difference. Think about how much hockey has added to your life and now think about how cool it would be to help a girl, who otherwise might not have been able to, experience the joy of hockey. Pretty cool if you ask us.”