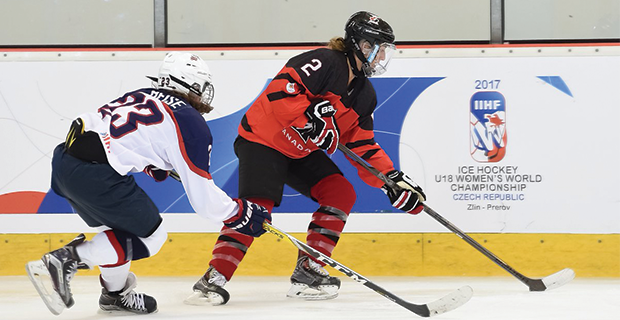 Canada’s Maegan Beres battles for the puck against U.S. player Taylor Heise. Canada had to settle for silver after a 3-1 loss to the U.S. at the 2017 IIHF U18 Women’s World Championship. (Hockey Canada/Twitter)

For the third year in a row, Canada will have to settle for a silver medal around their necks while their U.S. rivals take gold at the IIHF U18 Women’s World Championship.

In a tight match between the familiar foes, Canada wouldn’t come out with the effort that helped them defeat the U.S. in the preliminary round.

Canada had several strong opportunities in the first period including two power plays. U.S. netminder Alex Gulstene continued to turn away pucks and gobble up rebounds. A four-on-two opportunity was also squandered as a U.S. defender stepped in to break up the play.

Gulstene stood out most in the first period after facing an onslaught of shots. Canada came out with an aggressive offence, outshooting the U.S. team 12-3.

Canadian goalie Danika Ranger (Uxbridge, Ont./Durham, PWHL) was tested early in the second period making a nice glove save on a Catherine Skaja shot after a Canadian defender coughed up the puck in the neutral zone. Under attack with the U.S. on a power play, crisp passes led to a sharp angled shot at the side of the net off the stick of Delaney Drake found its way past Ranger to give the U.S. a 1-0 lead.

Canada appeared to have scored the game-tying goal just a few minutes into the third period but the celebration was cut short as the ref called off the goal. Brette Pettet (Kentville, N.S./Shattuck’s St. Mary’s, USHS) fed a short pass to Amy Potomak (Aldergrove, B.C./Pacific, JWHL) who was crashing the net and made contact with the goalie.

The Canadians would not be deterred. Just as their power play was about to expire, Daryl Watts (Toronto, Ont./Mississauga, PWHL) dumped the puck to the corner from the blue line. She circled back to the slot and found herself wide open for a return pass from Emma Maltais (Burlington, Ont./Oakville, PWHL). Watts fired a wrist shot that went over Gulstene’s blocker, tying the game 1-1 with 6:17 remaining in the third period.

The U.S. responded at 2:31 when Clair Degeorge flipped the puck up the neutral zone to Grace Zumwinkle. Trailing in on the give and go, DeGorge wired a shot on net that landed right on Zumwinkle’s stick. She buried the puck past a sprawling Ranger, giving the U.S. a 2-1 lead.

Canada spent the final two minutes on the power play but could not tie it up. The U.S. sealed the victory with an empty net goal from Emily Oden with five seconds remaining in the period to win the gold medal 3-1.

Russia won the bronze medal defeating Sweden 2-0. A medal will not be the only thing they will be remembered for at the 2017 tournament. Russia was at the centre of a brawl in their quarterfinal game against the Czech Republic. While Russia went on to win the game 2-0, Oxana Bratishcheva was assessed a major penalty and game misconduct for checking to the head. Russian captain Nina Pirogova and Czech player Kristyna Kaltounkova were booted from the game for fighting.