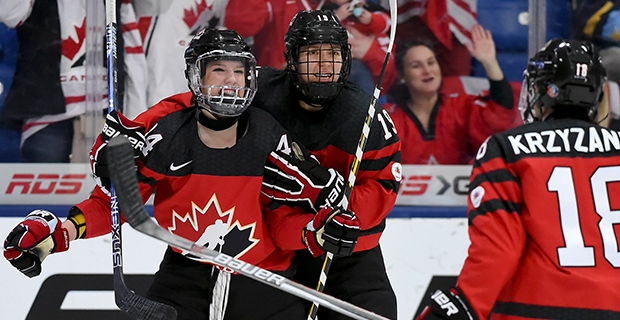 Sarah Potomak, Brianne Jenner and Halli Krzyzaniak were part of the silver-winning Team Canada at the Women's Worlds and all three, along with 18 other 2017 Women's World team members, were selected for the centralization roster (Hockey Canada images).

Although it is over eight months away, the 2018 Olympic Winter Games in PyeongChang just got a little bit closer for the 28 players that are vying for a spot on Canada’s national women’s hockey team.

On May 11, Hockey Canada announced the list of invitees that hope to make the final cut to 23 players that will represent the country at the next Olympics. Half of those selected for centralization are players that won gold at the 2014 Olympics.

“First and foremost every team that has gone to the Olympic Games has been an outstanding team that Hockey Canada has been able to put together and I am really excited about the group of players that we have selected to move forward because I think we have a really good mix,” said head coach Laura Schuler. “A mix of veterans and a mix of some younger kids and I am just really excited about the journey that is ahead of us and doing what it takes to continue to grow our players, like I said individually and collectively, so we can come together as a great team.”

The journey to #PyeongChang2018 begins in Calgary for 28 @HC_Women.

Most notably left off the list is goaltender Emerance Maschmeyer, who played a big role with the team at the 2016 IIHF world championship in Kamloops and was on the roster at the same tournament in 2017 — both times Canada brought home silver.

The trio of goalies that were selected include Shannon Szabados, who was in net for the past two gold medals Canada has won at the Olympics, Genevieve Lacasse, who was on the roster in Sochi but did not play and NCAA Patty Kazmaier award winner Ann-Renée Desbiens.

“The one thing that we are just so lucky with is our depth of goaltending in Canada,” said Schuler. “We are just so fortunate with the depth that we have right now and that decision was incredibly hard to make knowing that we only could go with three goalies. I think we are very fortunate where we are right now with the depth we have and I think we needed up going with three goalies that are going to be outstanding for us.”

Hockey Canada announced Maschmeyer, and goalie Erica Howe, will be available to support the centralization roster throughout the 2017-18 season but will remain with their club teams.

Canada will be without the leadership group of Hayley Wickenheiser, Jayna Hefford and Caroline Ouellette, who announced their retirement from the national program since the last Olympics.

“For sure those are really big shoes to fill, but I think the chance to play with them and learning for them I am fortunate … I know those are big players that have played at the highest level and for us we are going to have to make this team our own now and build from there,” said Marie-Philip Poulin, who has captained Team Canada at several world championships since Sochi.

Brianne Jenner, who captained her Calgary inferno club team and most recently was part of the leadership group at the world championships in Plymouth, Mich. said she is excited about the challenge ahead of the players who have been tapped as the new leaders.

“Those are legends in our sport and in our game and obviously they will certainly be missed but this is a new team now and a new era I believe and our focus is to try and get the program back on top. I think we have all the experience and leadership we need in this room it is just a matter of figuring out how to get that job done,” said Jenner.

All players on the centralization roster will begin their preparation with fitness testing in late May. Details on the location of the camp are expected to be announced next week.

Players and staff will then come together in Calgary in August on a full-time basis with Hockey Canada, based out of the Markin MacPhail Centre at WinSport’s Canada Olympic Park. In previous years during the lead-up to the Olympics, Team Canada has participated in the Alberta Major Midget Hockey League. Schuler said a schedule is expected to come out in the next few weeks of what their plans are for the fall and winter prior to the Games.

Canada’s final 23-player roster for the 2018 Olympic Winter Games is tentatively scheduled to be determined in late December.

The 28 players on the centralization roster are: