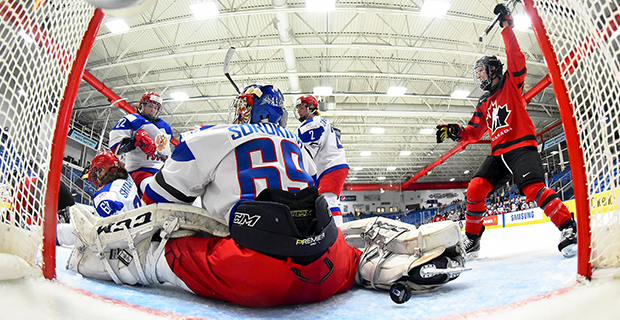 Canada celebrated a 8-0 win over Russia as they finished preliminary round play at the IIHF Women’s World Championship 1-2, good enough to send them to the semifinals. (Hockey Canada/Twitter)

An 8-0 win over Russia was enough to give Canada a bye into the semifinals after a tumultuous week at the IIHF Women’s World Champions.

Losing their first two games in the preliminary round against the U.S. and Finland, Canada’s first win of the tournament, along with Finland falling to the U.S., pushes them to the semifinal round on April 6 (3:30 p.m. ET). They will play the winner of the Finland versus Sweden quarterfinal game. Russia will play in the other quarterfinal against Germany, with the winner going on to face the U.S.

“Yesterday was important for us to take a deep breath, it was a game of hockey that we lost and we weren’t out of the tournament so we had to show up today. We had to win and we had to do it in the right way which was being committed to the game plan and really making sure that we played a complete game,” said alternate captain Haley Irwin (Thunder Bay, Ont./Calgary, CWHL).

Erin Ambrose (Keswick, Ont./Toronto, CWHL) put Canada up 5-0 midway through the second period with a powerplay marker. The Russians kept Canada on their toes in the second period, with goalie Shannon Szabados (Edmonton, Alta./Fort Saskatchewan, CHL) making seven of her 16 saves on the night. On the other end of the ice, Canada scored four goals in four minutes and seven seconds in the middle frame.

“At the start of the game, we didn't listen to the coach and tried to attack. Maybe we underestimated the Canadians after their loss to Finland, we thought that we could beat them,” said Russian forward Anna Shokhina. “Now we have to forget what happened in the group stage and focus on the quarterfinal against Germany. It will be even harder than in the group, but I think that we will be fine.”

Another power play goal for the Canadians by Brianne Jenner (Oakville, Ont./Calgary, CWHL) chased the Russian goalie Maria Sorokina out of the net. Meghan Agosta (Ruthven, Ont./Team Canada) welcomed Nadezhda Alexandrova to the game with a goal less than two minutes after she relieved her teammate of netminding duties. Then with just 41 seconds left in the game, Amy Potomak (Aldergrove, B.C./University of Minnesota, WCHA) netted her first with the national team capitalizing off a rebound to finish off the game 8-0. Canada finished with a 41-16 advantage in shots on goal.

“I was just super excited and happy to be able to get that first one; it’s a really special feeling and it’s an honour to be able to score for your country. It was a really cool feeling for me,” said Potomak.