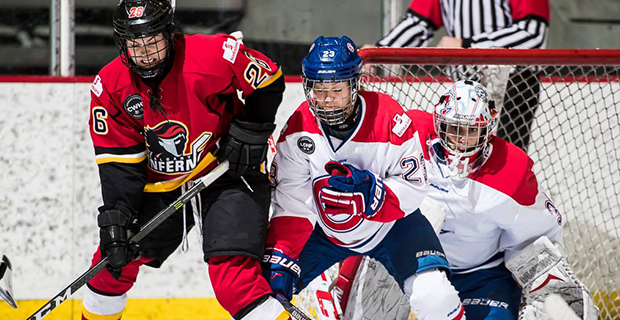 If the Canadian Women’s Hockey League regular season could be summed up in two words, it would be “record breaking.”

The defending Clarkson Cup champion Calgary Inferno set a new record for the franchise of 20-4-0-0 to clinch the first position overall in the regular season, for the first time.

It came right down to the final weekend where they hosted second place Les Canadiennes de Montreal to find out who would be the regular season champion. Skating to a win on Saturday clinched the crown for the Inferno.

“We’re always battling for first place, the ultimate goal is the Clarkson’s Cup so we just keep pushing towards that,” said Brittney Fouracres of Les Canadiennes, who finished 17-5-2-0.

Les Canadiennes bounced back the following night, beating the Inferno 5-3.

“Sometimes these games are tough to play in when they don’t really mean anything in the standings but yet you are preparing for the playoffs and there’s a lot on the line. So if you still want to get to your ultimate goal, you have to keep getting better. Montreal is a very good team and they don’t quit.” said Inferno coach Scott Reid.

Les Canadiennes forward Ann-Sophie Bettez won her third CWHL goal-scoring title, joining Jayna Hefford as the only players to do so three times. Bettez seemed to be everywhere in the second half of the season, including singing the national anthem before their game against the Toronto Furies. She rocketed up the statistics chart, scoring 15 points in January. Linemate Marie-Philip Poulin is the co-winner of the Angela James Bowl for most points earned, finishing with 37 points. Goaltender Charline Labonté took the shutout title with five this season and the most wins. With no shortage of firepower on Les Canadiennes, forward Caroline Ouellette broke a few records of her own this season. First she recorded her 300th CWHL point in December then the three-time Clarkson Cup champion and four-time Olympic gold medallist scored her 130th goal, tying her with Hefford for first all-time in CWHL goals.

Special stick for a special milestone.

The Canadiennes were also part of the most watched CWHL game ever, when an average 136,400 fans watched them play the Toronto Furies on Sportsnet.

The Brampton Thunder also proved they are not to be taken lightly. Jess Jones will share the title of Angela James Bowl winner this season with Poulin. She is the team’s highest scorer since Gillian Apps collected 29 points in 2011-12.

The odd ones out for the playoffs were the Boston Blades, who finished last in the standings with just two wins and six points. Rookie goaltender Lauren Dahm logged over 1,100 minutes while turning aside 732 pucks.

The Inferno face the Furies in a three-game series while Les Canadiennes face the Thunder. The winners of each series will face off for the Clarkson Cup.

In all six regular season games against the Furies, the Inferno won. Two of those games went into overtime with Hayley Irwin and Brianne Jenner netting the game winners. The Furies were outscored 22-6 in the regular season matches.

Les Canadiennes won four of their six matchups against the Thunder, outscoring them 21-15, with Labonté between the pipes for all six games. With the co-winners of the Angela James Bowl facing off against each other, it should make for an interesting series.

While no one can be taken lightly with the potential of playing for the Clarkson Cup at stake, if the two most dominate teams during the regular season have it their way, it will be Inferno and Canadiennes playing for the league title.

The Clarkson Cup final will take place in Ottawa on March 5 at the Canadian Tire Centre in Ottawa. The awards gala is on March 3.