Wenatchee atop the RBC Cup through three games 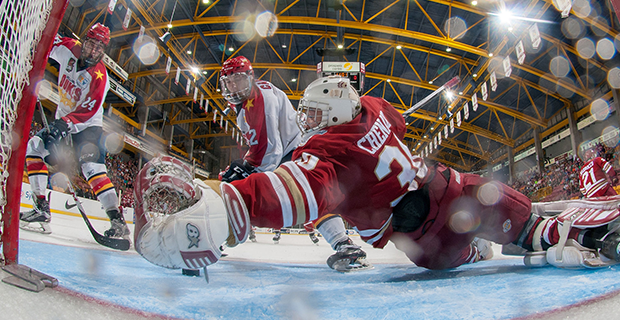 Chilliwack's Daniel Chenard stretches out to make one of his 20 saves en route to a 2-0 shutout win against Wellington. (Matthew Murnaghan/Hockey Canada Images)

Four days into the 2018 RBC Cup and it’s been as competitive as one could wish, with all but one game ending by a goal.

The early leader after three games are the British Columbia Hockey League’s (BCHL) Wenatchee Wild, the lone American entry in the tournament, who are 3-0 with two overtime wins.

Trailing the Wild is the host Chilliwack Chiefs, who had not played for an entire month before this and also replaced their head coach just before the start. The Chiefs have six points, while the Ottawa Jr. Senators who have one overtime win, have also lost twice in the extra frame, earning a point in each game. This is where the clutter starts.

Also from Ontario, the Wellington Dukes are one point back of Ottawa with an OT win and OT loss. Behind them, the Steinbach Pistons have some work to do if they want to get a top-four spot and make the knockout stage as they are winless through two and have just a single point.

Finn Evans had an assist on the first Senators goal before potting the winner in overtime. Evans tipped home a shot from Zachary Salloum to fool Jonah Capriotti and give Ottawa the win.

In the evening game, host Chilliwack took on their league counterpart Wenatchee, with the Wild earning a 2-1 overtime win after Lucas Sowder skated down the length of the ice to bury the winner for his squad. Chilliwack had led 1-0 for much of the game before the Wild scored with 10 minutes remaining in the third to tie it.

On day two, Wenatchee was right back in action as they played the Manitoba Junior Hockey League (MJHL) champs, Steinbach, who were playing their first game of the week. Despite scoring the game’s first two goals, the Pistons couldn’t weather the Wild attack, led by Wenatchee’s Jasper Weatherby who potted two goals and an assist. A.J. Vanderbeck scored the eventual game winner seven-and-a-half minutes into the final period as Wenatchee won 4-3.

The Chiefs gave the home crowd something to cheer about Sunday afternoon when they beat the Jr. Senators 4-3 in overtime. Ottawa scored a goal each period, but it wasn’t enough – the Chiefs’ Will Calverley scored all four goals for his team, including the game-tying and game-winning markers.

After having Sunday off to recover and think about their opening-day lose, the Wellington Dukes got back on the ice and faced off against the also winless Pistons. The fourth overtime game of the first five in the tournament saw the Dukes leave victorious 3-2 after they scored the contest’s final three goals, including Ted McGeen’s tally one minute into overtime.

The RBC’s first shootout came Tuesday afternoon when Wenatchee kept their unbeaten play going and knocked off the Jr. Senators. The Wild outshot Ottawa 38-26, but Ottawa’s four shots on net in overtime trumped Wenatchee’s zero. A five-round shootout was concluded after Matt Dorsey slipped the winner by Connor Hicks to win 3-2.

Tuesday’s evening contest had the Chiefs shutout the Dukes 2-0 and mark the tournament’s first game that was not decided by one goal. Calverley’s impressive tournament continued as he scored his fifth of the week. Daniel Chenard stopped all 20 shots he faced while Capriotti turned aside 40 of 42 shots. It was a heated game, with Wellington picking up 52 PIMs and the Chiefs 32.

Weatherby from the Wild is first in scoring with six points, followed by teammate Vanderbeck at five. Calverley leads with five goals.

Wenatchee and Chilliwack are the only two teams guaranteed to play in the semi-finals, while the other three will need to battle it out.

On Wednesday, Steinbach looks to stay alive with a game against Ottawa, and Thursday the opening round wraps up with Wenatchee facing the Dukes and the Pistons clashing with the Chiefs.