U.S. vs Canada and the IIHF Women’s World Championship Preview 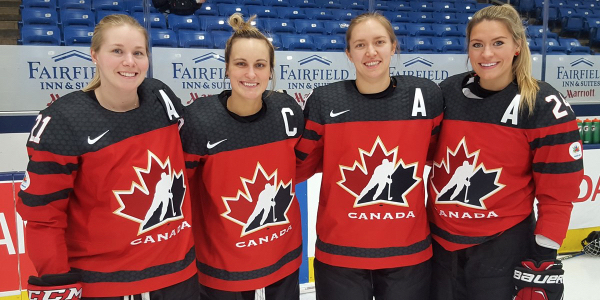 While you wouldn’t suspect the No. 1 ranked team in the world would still have many firsts to check off their bucket list, winning gold on their home turf is one of them. It’s a feat they have not accomplished, even having hosted the tournament four times.
To make things tougher, first up will be a rematch of last year’s finals against Canada.

Leading Canada into the fray will be the Canadian Women’s Hockey League Clarkson Cup winner and league MVP Marie-Philip Poulin (Beauceville, Que./Montreal, CWHL), who will captain the team that is looking for their first gold medal since 2012.

“This is a veteran group of players who have worn the red-and-white on many occasions for us,” said Laura Schuler, head coach of Canada’s national women’s team. “These players possess the values that we believe can guide us to success and we’re confident in their abilities and out team’s preparation.”

Poulin will be joined on the leadership team by Haley Irwin (Thunder Bay, Ont./Calgary, CWHL), Brianne Jenner (Oakville, Ont./Calgary, CWHL) and Natalie Spooner (Scarborough, Ont./Toronto, Ont.) who will rotate the ‘A’ and serve as alternate captains for the duration of the championship.

Canada swept the U.S. in a two-game exhibition series in December and expects to come into this tournament just as hard.
“They have a great, fast gritty game and so that’s what we want to bring as well. Play with a bit of swag and confidence and just go out there and see what we got,” is what veteran defender Meaghan Mikkelson said of tonight’s matchup against the U.S.

On the other side of the border, U.S. women’s national team member Meghan Duggan will captain the squad, just as she has at the previous two world championships and the Sochi 2014 Olympics. Duggan just had her best season in the National Women’s Hockey League playing for the Boston Pride with 19 points in 16 games.

Duggan told IIHF.com that investing energy into their team culture, their style and systems is what will be the difference-maker as they attempt to win their fourth straight world championship.

Canada has a few fresh faces to the senior national team, but familiar names to those in the CWHL. This includes rookie of the year Laura Stacey.

Emerance Maschmeyer was Canada’s go-to goalie the past few years and with the return of Shannon Szabados to the national program, they have two stellar netminders to choose from. Maschmeyer was in a goalie duel in last year’s world championship final against U.S. netminder Alex Rigsby. Szabados, who had been playing in men’s leagues since the Olympics, has helped Canada to the past two gold medals at the Olympics. She also was in net the last time Canada won gold at the world championship in 2012.

Finland’s 2016 world championship bronze medal shootout loss to Russia is out of sight, out of mind for Venla Hovi.

“You can’t really think about things too much. We played 13 games this season against European countries and won all 13. The fact that we lost last year isn’t something we can dwell on, there is no point thinking about it,” said Hovi, who helped Finland win a bronze medal at the 2010 Vancouver Olympics and made her first appearance at a world championship in 2007.

Finland will play in Group A during the 2017 IIHF Women’s World Championship in Plymouth, Michigan, but will get a rematch against Russia in their first preliminary game on March 31. They then will face Canada (April 1) and the U.S. (April 3).

With a mix of young players and experienced veterans, Hovi, who plays with the University of Manitoba Bisons, said the team will be a contender once again.

“Our speed is our No. 1 asset. Then playing together as a team. Whenever we play together as a tight unit, we are very tough to beat. We have a lot of individual skill this year which will be great and I think our scoring will better than any previous tournament.”

Hovi expects Petra Nieminen, one of the younger members of the team, to turn heads.

“I feel like she is a player with a lot of natural skill and loves to play the game so she works really hard. When she gets the chance to score, for sure she will use it. She is an incredible talent, really humble, has a lot of skills and is a great girl to have on the team,” said Hovi.

Finland has always been blessed with top-notch goaltending and this world championship is no different. Noora Raty returns to the team after an absence of three years, she has played in a professional men’s league since just after the 2014 Sochi Olympics.

“Good goaltending is something we have had, I didn’t even think to mention it just now because they have always been great,” said Hovi. “In a tournament like this where you are playing with the best players in the world you can’t go far if you don’t have a good goalie.”

Last year, it was Meeri Raisanen who carried them to the bronze medal final, but she is not on the roster for this world championship.

Head coach Pasi Mustonen told the IIHF it is the best team they have iced in his three years with the national team.

“We’re going to the championship with a positive mindset. The aim is of course to return to a medal placing.”

Team dynamic is something Lara Stalder ranks high on the list of a Swiss national team that has seen the program grow in leaps and bounds over the years.

“We are all so passionate about our team and the game. We have a really good group, with a lot of team spirit. Since the Olympics we have only gotten better,” said Stalder, who was a Patty Kazmaier finalist playing with the University of Minnesota Duluth.

“There was so much more interest in our team after we won that Olympic bronze. It helped us take huge steps forward. We now have a full-time head coach (Daniela Diaz) and that is something the program never had before,” said Stalder.

With Florence Schelling, one of the best goaltenders in the world, keeping pucks out of the net, Switzerland qualified for the 2018 Olympics in February. She will appear in her 11th world championship with two solid backups behind her in St. Cloud University’s Janine Alder and Andrea Brandli.

The Swiss defeated the Czechs in the Olympic qualifier and will have to find a way past Sweden and Germany if they want to continue on their upward trend. Stalder said they are taking things slowly and not looking too far ahead, instead just focusing on each game, hoping they can break their curse of failing to make it out of just regulation games at this tournament.

Taking their third bronze medal ever at the world championship last season, Russia has been narrowing the gap between the top three women’s hockey teams and the rest of the world.

Veteran Iya Gavrilova credits that directly to the Russian Federation for providing more support to the national program in the lead up to the 2014 Olympics.

“The support has been great. There are so many girls playing hockey right now and it is great to see that progress. We are seeing the young players starting to come through the system and some new faces. We also have a new coach and I think this world championship is going to be fun,” said Gavrilova, whose club team is the Calgary Inferno in the Canadian Women’s Hockey League, where she a rookie of the year nominee this season.

Russia opens the tournament against the team they beat last year for the bronze medal, Finland.

“It is always nice to play against them because we feel we match pretty good against them. I also think we have a lot more experience this year and more confidence from the goalie out because of the bronze medal,” said Gavrilova.

They return to the world championship with goaltender Nadezhda Morozova, who shut out Finland in that bronze medal final last year in Kamloops. The team’s goalscoring leader from the 2014 Olympics, Yekaterina Smolentseva returns to the world championship with the national team as does last year’s hero, Olga Sosina, who scored the game winner in the shootout. She will miss opening day as she was suspended, along with Anna Shokhina, for penalties (match for kicking and match penalty with 69 seconds remaining in the game for tripping) in an exhibition game earlier this week against Switzerland.

Sosina was also the difference maker at the 2017 Universiade, where she earned three points (two goals and an assist) to help Russia defeat Canada 4-1 for the gold medal.

Russia will play in Group A, and will face Canada in their third preliminary game on April 3. They meet Finland first on March 31.

“In my opinion, we are ready for the world championships. Finland are a strong team, but if we stick to the coach’s game plan, the result will be a good one,” said Russian defender Nina Pirogova.

Russia are ready for the Women's World Championship in America! Take a look at the team's photoshoot yesterday: https://t.co/HcqZScxm4W pic.twitter.com/zopvthjNZZ

Typically a medal contender in any major tournament, Sweden has been in rebuilding mode for the past four years.

While undergoing that, other countries have started to play catch-up — in particular Russia and Finland.

The team has been out of the medals in all major tournaments since 2007.

At this world championship, Sweden will play in Group B. In order to make it to the quarterfinals they will have to get the better of Germany, Switzerland and the Czechs.

A mix of veterans and up and comers, the German national team says they are ready to compete.

“The upcoming top division Women’s World Championship will be a great challenge. We will prepare intensively during the upcoming days of camp in Ann Arbor for our first opponent Sweden,” said head coach Benjamin Hinterstocker.

Four players on the German roster play for U.S. college teams, three in the Swedish league and rest play on German club teams.

Germany will be looking for some redemption after losing to Japan at the Olympic qualifier and missing their chance to play in PyeongChang in 2018.

This will be the third time the Czech team has skated in the IIHF Women’s World Championship.

Progress has been coming for the team on the world stage, but it is slow. Last year, in Kamloops, they fought their way to the quarterfinals, only to be shut out by Finland who moved on to play Russia in the bronze medal final.

They will play in Group B with Sweden, Germany and Switzerland.