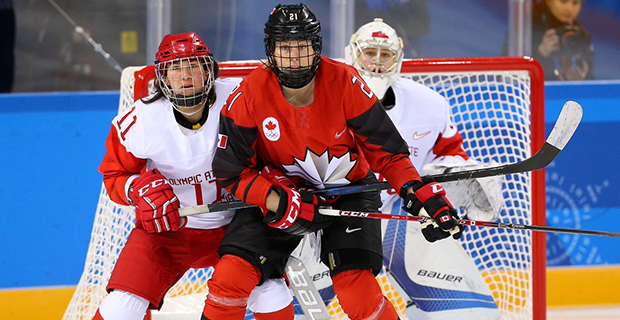 Haley Irwin in front of the Olympic Athletes of Russia net during the preliminary round game, where Canada won 5-0. Canada faced them in the semi final defeating them 5-0. (Hockey Canada/Twitter)

The U.S. and Canadian women’s hockey teams have faced off 10 times over the past five months, but all that matters now is the one game in front of both squads.

Canada knocked off the Olympic Athletes of Russia 5-0 to advance to the 2018 PyeongChang Olympic gold medal game and the U.S. shut out Finland 5-0 to earn their berth to the final. Despite the easy wins in the semifinals for both teams, they know the bigger battle is yet to come.

“You look around to the right and to the left in our locker room and we have such a powerful room. I wish everyone could be there and see what we see and what we get to experience,” said U.S. forward Hillary Knight, who scored her first goal of the tournament in the semifinal. “The stakes couldn’t be higher and it is going to be a lot of fun.”

Related: Nurse Nets Winner for Canada in Win Over the U.S.

Canada will be playing to win their fifth-straight gold medal, something that has never been done by a Winter Olympics team in any sport.

The U.S. is looking to win the ultimate prize for the first time since they took the gold medal in 1998, when women’s hockey was first introduced into Olympics.

“Our team is the closest it has ever been and we are like a family,” said Meghan Agosta (Ruthven, Ont./Hockey Canada) after their semifinal win. “We need every person playing at their very best to be successful and we just have to carry the momentum. It comes down to one game; we will be ready for whatever it takes.”

Canada has won seven of the last 10 games they have played against the U.S. since October, which includes the six-game exhibition series and the 4 Nations Cup tournament. Canada fell in Game 1 of the six game series 5-2, but came out on top in the remainder of the matches. At the 4 Nations Cup, held in December, the teams met twice with the U.S. winning 4-2 and 5-1.

Canada’s top line of Agosta, Marie-Philip Poulin (Beauceville, Que./Montreal, CWHL) and Mélodie Daoust (Valleyfield, Que./McGill University, RSEQ) has combined for 15 points over the last four games at the Olympics — including five of Canada’s 16 goals. That is just over double what the U.S. top line of Kendall Coyne, Brianna Decker and Knight have produced (seven points).

For Clark, who plays on an all-rookie line for Team Canada, it was her first Olympic goal.

“It was absolutely amazing, this year I’ve struggled a little bit in that department but my teammates have done nothing but build me up. The belief that they had in me definitely helped me believe in myself and to be able to share that moment with them tonight is a moment I’ll never forget,” she said.

Shannon Szabados (Edmonton, Alta./Hockey Canada) turned aside 14 shots to record the shutout in her second start at the Games.

In the other semifinal, U.S. forward Dani Cameranesi had a three point game (2G, 1A) and goalie Maddie Rooney made 14 saves as they defeated Finland 5-0.

Gigi Marvin scored the opening goal with a one time shot past Finnish netminder Noora Raty just 2:25 into the first period. The U.S. took a 2-0 lead into the first intermission when Cameranesi netted her first goal of the game, firing a shot from the slot that sailed over Raty’s blocker.

In the second period, the U.S. scored twice in 10 minutes giving them a 4-0 lead. Jocelyne Lamoureux-Davidson connected on the power play and then 34 seconds later Hillary Knight scored on another U.S. power play.

Cameranesi, who leads the team in points, added another goal 45 seconds into the third period, burying past Raty’s glove. The U.S. outshot Finland 38-14.

“I like that everybody contributed. We had a goaltender just play lights out. We had Dani Cameranesi sniping. We had Gigi Marvin. Everyone was rolling and that is what we want. That is the type of team that we built and we are looking forward to another opportunity to play,” said Knight.

Finland will play in the bronze medal final against Russia on Feb. 21 at 1:40 a.m. (EST). Forward Venla Hovi, who plays for the University of Manitoba Bisons, is a member of the Finnish national team. It will be the first time the Russia will compete for an Olympic medal in women’s ice hockey.